From NFTs to Quantum Computing 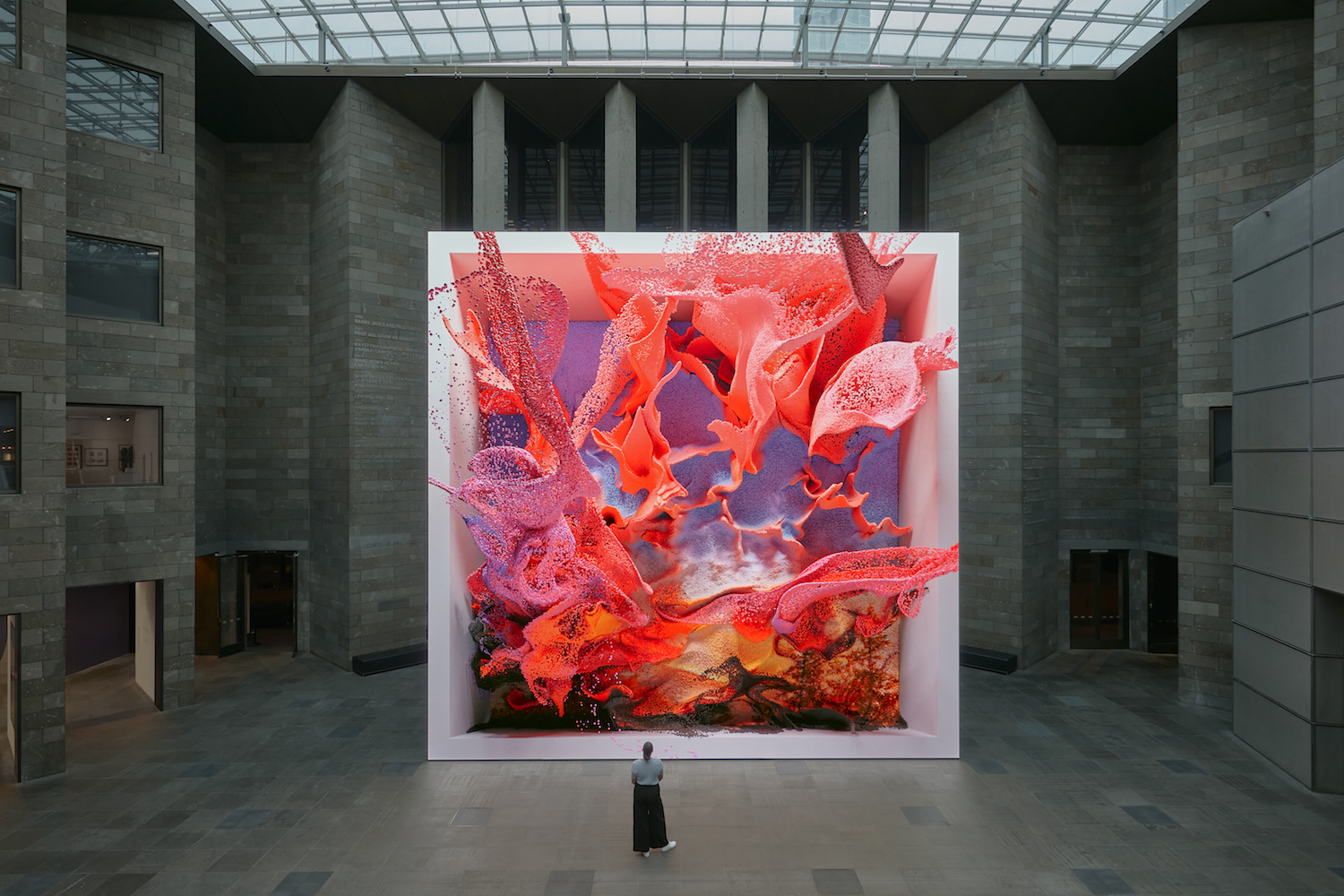 In recent years, the art world has been reshaped by new technologies, with artists increasingly entwining human and machine creativity by exploring the latent space of neural networks. In the process, they have shed light on the biases lurking beneath the datasets deployed to train machines. At the same time, blockchain and NFT technology have provoked new debates about the commodification of art, about the material impact of digital ledgers, and about the (alleged) democratization of creative commerce. But while these developments have captured the public imagination (and consternation) another technology has flown under the radar.

First, the science. Quantum computing is based on the properties of quantum states, such as superposition (the characteristic of a quantum system of being concurrently in multiple states) and entanglement (which occurs when two or more quantum objects share properties in such a way that they cannot be described separately). A quantum bit (qubit) is the basic unit of quantum information. Unlike a bit used in classical computing, which is binary because it can only be found in a state of 0 or 1, a qubit can exist simultaneously in combinations of 0 and 1 until it is measured or disturbed. A quantum computer can therefore perform a huge number of calculations in parallel, surpassing the sequential nature of classical computing.

Yet it also represents a potent tool of creative expression — a means to explore reality in non-classical terms and a way to critically investigate socio-cultural phenomena. Up till now, this has manifested in the world of music: In the performance of mezzo-soprano Juliette Pochin and Alexis Kirke back in 2016; at the 1st International Symposium on Quantum Computing and Musical Creativity (ISQCMC) that took place online in November 2021; and through the work of artist and composer Erin Gee. But the quantum art scene remains a niche one.

A renowned artist who is no stranger to experimenting with technology and has recently worked with quantum computing is Roman Lipski. In an interdisciplinary collaboration with IBM Research Zurich, the Berlin-based painter has created a new body of work using Quantum Blur. Lipski is well known for “Unfinished,” an ongoing art project whereby artificial intelligence plays the role of a muse to unleash human creativity. By experimenting with technology, Lipski emphasizes the interplay of art and science. Quantum Blur is a new medium to enable and highlight the unity of these two worlds, resulting in new forms of creativity and discovery.

According to IBM, Quantum Blur is a software that “encodes images into quantum states, and manipulates the interference patterns using quantum operations. The user can then experiment with the basic elements of quantum software, and design novel effects to provide unique variations of their images.” To mark the results of this collaboration, the artist and IBM Quantum hosted an exhibition at his studio last November. Past works revisited with Quantum Blur were placed side by side with unpublished ones, whilst animations and AR technology highlighted the ways in which this technology can impact the art world. The event reflected on what it means to think in quantum terms and reinforced the importance of cross-fertilisation between art and science to stimulate creative expression. It also highlighted a growing interest from the art scene, collectors and members of the public.

Lipski’s work with IBM builds on his long-standing efforts to bring man closer to machine that began with his work on machine-learning algorithms. In his collaboration with the art collective YQP and the artificial intelligence company Birds on Mars, the artist worked to develop a new and fruitful conversation between human and artificial agents. His creation of an artificial muse led him not only to reinvent his own visual language by pushing him toward abstraction, but also to approach new themes and experiment with different forms of representation. He therefore brings a unique insight into human-machine collaboration to the art of quantum computing.

Of the creative community that has recently turned to quantum computing, Refik Anadol stands out as a pioneer in machine intelligence and data aesthetics. The media artist and director entered the NFT space in early 2021 with a series of data paintings and sculptures whose foaming waves threatened to collapse their frames in a playful parody of modernist abstraction. His influence currently unfolds between online marketplaces, international art fairs, and auction houses, elliding physical and digital aesthetics while traversing the space between data and memory. This is amplified on the blockchain, where, according to the artist, “NFTs provide the kind of portal as a culture that brings several technologies together.”

In 2021, he launched “Unsupervised” in collaboration with MoMA as part of a series, titled “Machine Hallucinations” (2016-ongoing), that became a solo exhibition on Feral File. As with his previous work, the piece was a hybrid mix of architecture and media art that lends digital corporeality to the broadest themes of knowledge, consciousness, collective memory, and creativity. With exclusive access to MoMA’s archive, Anadol produced works whose chromatic intensity and potent abstraction sought to resolve the artist’s own question: “Can data become a pigment?”

Quantum Memories (2020), commissioned by the National Gallery of Victoria (NGV) and born as an immersive and ever-iterating work of art, imagines a parallel world of cutting-edge technologies. Inspired by the natural world, the project leveraged Google Quantum AI to process approximately 200 million nature-related images, resulting in what Anadol calls “a snapshot of humanity’s collective memory of nature.” By exploiting the data made available by Google’s quantum computer prototype, the artist introduced randomness to influence the output of the AI in order to generate new images.

The subsequent 3D artwork, backed with audio generated by quantum noise, produces an immersive experience in which the public crosses over into digital time and space redrawn from the collective memory of the natural world. Here, the many-worlds interpretation, which derives from quantum mechanics, is filtered through a creative exchange between man and machine. Implicit is a potentially infinite space now available to human and non-human agents. “Quantum Memories” is consequently one of Anadol’s most sophisticated works to date, one which reflects the aesthetic potential of quantum computing.

Libby Heaney is another prominent figure in the field who combines scientific expertise with the critical perspective of an artist concerned with technology. With a PhD in Quantum Information Science, her concern for the environmental impact of proof-of-work blockchains is currently delaying her wholesale entry into the NFT space. So far, Heaney’s only contribution to the field is Venuses (quantum bodies watched by Open Pose algorithm) (2021), part of another Feral File exhibition, “Reflections in the Water.” This video work is rooted in the artist’s extensive research into figurative representation and the body’s hidden biases. Venuses used artificial intelligence to analyze body position and quantum algorithms to challenge the cultural standardization of canonical nude poses. Building on a prior work, Figures in Limbo (2020), Heaney introduces queer realities through the quantum entanglement effect, breaking the unity of the original image on a visual level by reversing it. In the process, she subverts the system of representation in which culture, art and technology remain trapped.

Heaney’s approach continues a long-standing strategy that pits technology “against itself,” creating a carousel of intertwined themes: From classification to capitalism, bias to identity. Her interest in quantum computing exposes the public to complexity through the concepts of plurality — which borrows from entanglement — and non-binarity, which borrows from superposition. Since 2019, she has been exploring ways to work with data from entangled states of qubits, writing code to manipulate images and voxels.

This effort has resulted in pioneering work. Cephalopod Aliens (2019), for example, employed IBM’s cloud-based quantum computing systems to suggest alternatives to the constraints of physical embodiment. To create a resemblance of the wave behavior of quantum physics, Heaney painted on a wet surface, thereby forcing color to interfere with itself. She then scanned the work and fed it to a quantum algorithm that broke its visual unity through pixel entanglement. This freed the painting from its original position and allowed hybrid forms to come to the surface. In quantum computing, the image representation schemes exploit the property of quantum states, such as entanglement, to initiate a parallel reconstruction of the image across a space of greater dimensionality than is possible using classical computation.

For Heaney, technology is a means to expose the myopia that pervades our post-digital age. Her latest endeavor, Ent- (2021-22), is an immersive audiovisual installation and major exhibition that occupies a black cube. Channeling her ambivalence to quantum technology, she engages the emotional side of the experience to critique our endless appetite for solutionism, proposing quantum thinking as a mitigation tool.

In creating her own quantum vision of Bosch’s Garden of Earthly Delights (1490-1500), the artist exploited both the fame and the interpretative ambiguity of the original work “as an accessible door handle for people wishing to enter not only the world of digital art, but also the complexities of quantum computing and its entanglements.” Through multiple stages of manipulation, animation and fragmentation, the Bosch-inspired painting went through successive breakdowns to a point of near-abstraction. In the process, Heaney offered a glimpse of the collapse of quantum states that occurs when a computer is roundly disturbed.

Quantum computing is increasingly usable thanks to cloud services, but its architecture and production remain problematic and its margin of error high. While Heaney and others are currently probing its creative potential, they also warn of its likely monopolization and illicit exploitation. Artists working with this little-known technology are well-positioned to unveil its complexity to the public while declaring its radical possibility. Whether they can safeguard its progressive power will depend on their ability to entangle the machine with artful intelligence.

Beth Jochim writes about the intersection of art and technology with a focus on artificial intelligence and creativity. She is the Creative AI Lead at Libre AI and a contributor to Flash Art’s digital column, “The Uncanny Valley.” 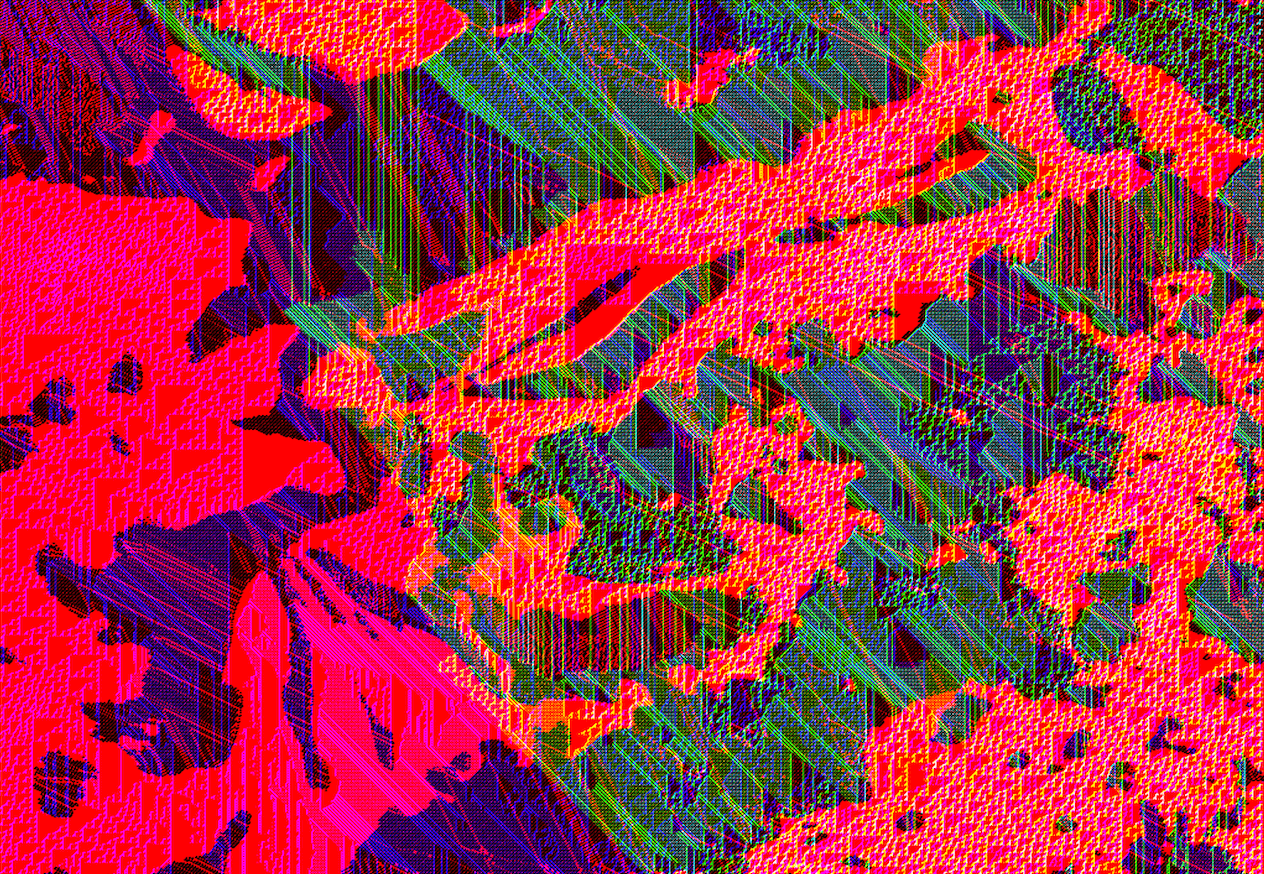