On the New Evolution of Generative Art 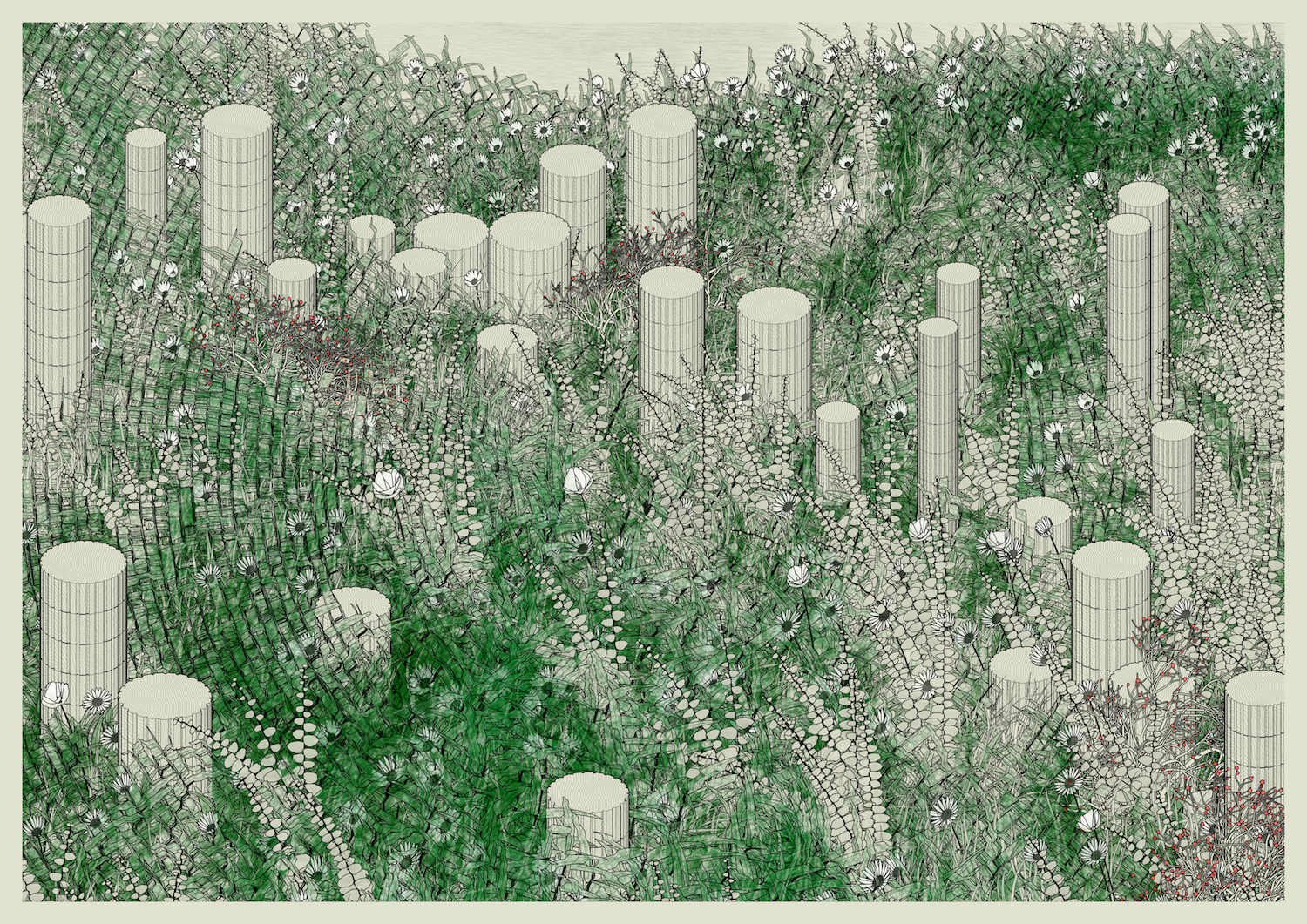 In the crypto art world, where a week is a year, there is a strange preoccupation with the narrative of the “OG.” The abbreviation stands for “Original Gangster,” which is both hilarious and telling. After all, some of the most sustained attention work minted as NFTs receives is from streetwear and culture sites like Hypebeast. But the “OG” in this case is the breakout star of the first wave of any particular form of crypto art. For generative art, this is most often cited as Tyler Hobbs, whose “Fidenza” series minted on the Ethereum blockchain has netted over $177 million in sales.

“Fidenza,” however, is indebted to the process art movements of the 1960s and 70s, particularly the geometric and instructional interests of Sol LeWitt, whom Hobbs references in his own graphite grid sketches. Yet that same historical moment also saw the emergence, not in the mainstream gallery star system but in experimental labs and methodologies courses, of plotter art. Plotter art uses a computer-directed arm with a pen holder to draw lines pre-dictated by code. Early works were done on laboratory networks running text-only interfaces, with standout pieces by Vera Molnar (who started working with computers in 1968) and Manfred Mohr generating complexity from initially simple geometric algorithms. If there’s any OG here, the genealogy is long and complex, and runs back at least fifty years.

Plotter art has seen something of a resurgence in the more experimental generative NFT art circles. While NFT-to-print services on Ethereum have emerged for higher-priced pieces like those on Art Blocks, Tezos artists on emerging platforms like fxhash initially offered plotter printing of generative works at a cost. Although all the works generated are theoretically reproducible by a plotter, they don’t physically exist unless a token holder explicitly orders one matching their NFT. Further, the hash code of the minted token supplies the pseudo-random generative factor of the art, which is in sum any physical piece ultimately produced, the whole series of generated images, and the generating code itself (usually p5 JavaScript or Hydra). This dance between materiality and non-fungibility is of interest to both artists and collectors attracted to the form.

An early luminary of the Tezos chain generative scene is emerging artist Michaël Zancan. A former oil painter from the South of France, Zancan has paintings from 2018 and earlier displayed on his personal website that are stunningly average — high fantasy run through a forest surrealism blender. Yet Zancan’s plotter art, in two series on Objkt.com and fxhash respectively, is nothing if not extraordinary for its status as a stylistic outlier. Both Lushtemples and Garden, Monoliths (both 2021) feature ambiguous felled stone structures and ample, almost overwhelming foliage. To the initial, unstudied gaze, they defy the now-dated expectation of somehow “looking algorithmic,” seemingly composed with a painterly eye to balance and density. The sparing use of green Copic Marker and occasional colored paper as a ground gives them the quality of the handmade whilst also being a by-product of coded instruction.

Zancan defies the genealogy of LeWitt, Mohr, and Molnar with wild abandon that neglects any pretense of geometric post-minimalism as output. Yet, implicitly, the methods behind Lushtemples and Garden, Monoliths are still a callback to the OGs of generative computer art, even if the outputs seem to defy the normal inorganic bent of these designs. Zancan himself describes the Lushtemples as “figurative generative art,” and in looking closely at Lushtemples — The Stones Which Stood and Ars Ex Naturae Ex this is apt self-terminology. As the second title suggests, the artist works at the intersection of the mathematical and the natural, like the edges of Mandelbrot fractals or the unpredictable tailing digits of e or pi. In Ars Ex Naturae Ex, carefully delineated broken columns suggest Vitruvian classical forms, and in The Stones Which Stood, almost squared stones imply a fallen henge overgrown by time. The distinctions between artificial and natural material within the scenes is highlighted by use of gray for the man-made and green for the terrain and plants.

In this regard, Zancan has another “OG” to whom he is indebted — Hieronymus Cock, whose 16th-century prints of Roman ruins inspired a flowering of Baroque obsession with architecture quite literally gone to seed. The juxtaposition of ruined works of man alongside the ever-growing, omnipresent greenery of the landscape in Cock’s work was often allegorical. In The Origins of German Tragic Drama (1928), Walter Benjamin characterizes the role of the ruin in this historical period as showing a new exuberance enabled by decay simultaneous with a wistful antiquarianism. Benjamin’s ruins are fecund; so too are Zancan’s — taking a period medium from early computing and populating it with new, leafy growth that overclimbs the geometric regularity of its tumbled structural past.

Yet to evoke Benjamin here is dangerous. Perhaps his most famous essay, The Work of Art in the Age of Mechanical Reproduction (1935) treats the introduction of the print as medium and the crisis it provoked in the world from the 15th to 17th centuries onward. For Benjamin, an “aura” of individuality defines a single, individually-produced artwork that is not similarly invested in a print. Zancan’s NFTs, themselves potential reproductions of not-yet-existent plotter drawings in ink, generated by an algorithm and in turn coded by an artist, are in many ways the Benjaminian nightmare of reproductive technology. Yet to see them is to be drawn in — it is undeniable that they have a compelling artistic worth. Is this an “aura”? Can an infinitely reproducible digital work carry an “aura,” and in the case of new plotter art in particular, is it more likely to have one because it is intrinsically linked to a physical medium on paper and ink?

These are the questions Lushtemples and Garden, Monoliths evoke in their long genealogy but also in their strident physical immediacy. Garden, Monoliths #3 features columns and long grasses that lean out of the frame toward the viewer, while others in the series, such as #249, have barely visible monoliths — only a glimpse of stone on a green ground that becomes an extension of the poppies, berry stems, and leaves that overwhelm the square frame. The crisp, rectangular monoliths of #181 suggest barely any decay at all. Perhaps a different amount of time has passed between each iteration. The pieces, to the untrained eye, could be sketches of ruins over many years and seasons. They seem to share an aura imparted by time.

An interesting study in contrast is the work of Matt DesLauriers, a more established figure in the generative art scene who has a long exhibition history predating the NFT form that includes plotter art. DesLauriers's work is not only formally but also conceptually polished; his own writing on the implication of NFTs for generative work is incisive and frames his artistic production. In two related pieces for Art Blocks: Meridian and Subscapes (both 2021), DesLauriers explores landscape and terrain. While Zancan’s pieces might feel akin to Albrecht Dürer’s Large Piece of Turf, a watercolor study from 1503, DesLauriers’s work evokes Dürer’s later landscape etchings with their exposed rock faces and complex, emotive layering of natural elements. DesLauriers’s experience shows in the variety of his generative mints and in the way they nod to plotter art without being plottable.

‍Subscapes, for instance, uses a square ground and inked style evocative of early plotter work but simultaneously well outside its capacities. It also shows considerable formal verve. It is a series of varying miniature terrain pieces in different colorways, styles, and gradients. The ground itself serves as a figure in the piece’s figure-ground relationship, winking at the conventions of illustrative art. #53000626 uses square, semi-gridded patches to suggest cartographic space, while #53000629, generated by exactly the same algorithm with a different token hash, is almost entirely stippled, suggestive of hand drawing instead. The isometric perspective of each tiny landscape is a kind of God’s-eye view that links back to metaphors of possession and mastery tied to 17th-century objects in the Wunderkammer. These, too, are Benjaminian themes. Here, aura is a kind of generated microcosm unique to each token owner. No two mints, by definition, are identical, even as they are, as digital images, technically almost infinitely reproducible.

In fact, each token of Subscapes is so distinctive that some move toward abstraction from figuration. While #53000555 can be read as a landscape paired with the piece’s title, without it, one might not assume it has a direct referent in the natural world. An improbable cliff paired with a collage-like surface pattern produces art made to look like nature that itself looks a little artificial. What Zancan begins to explore in Ars Ex Naturae Ex, DesLauriers masters knowingly with simple gestures embedded in his code. The potential artifice of the natural landscape and the ways in which this shapes the trajectory of representation itself is also implicit in the neon colorways of Subscapes tokens #53000451, #53000436, and #53000298, to name only a few. Is Subscapes natural? Is it artificial? Yes. And yes. Matt DesLauriers’s little worlds here prod both the nature-artifice line and that of reproducibility and uniqueness.

In keeping with their Benjaminian implications, then, both Zancan’s early work and DesLauriers’s foray into the NFT space, after years of plotter and digital art-making, share a concern with markers of naturalness and manufacture. In five months, when both artists are considered OGs in the crypto world, these pieces will feel almost classical to frequent buyers and viewers of generative art sites. In five years, when they are invariably included in a show of early work, they may feel like the beginning of a formal movement in natural algorithms that also raises questions about the state of artifice taking root. In fifty, perhaps they will feel like a LeWitt or Mohr — a methodological inflection point, both radiant and strange. Perhaps someday they will even be mounted next to another reproductive medium: An Early Modern print of ruins or mountainsides.

A.V. Marraccini is an essayist and art historian living in London. Her first book, We The Parasites, is out in Fall 2022 from Sublunary Editions.