Alex Estorick sits down with Erick Calderon, better known as Snowfro, to discuss Art Blocks and the future of generative art 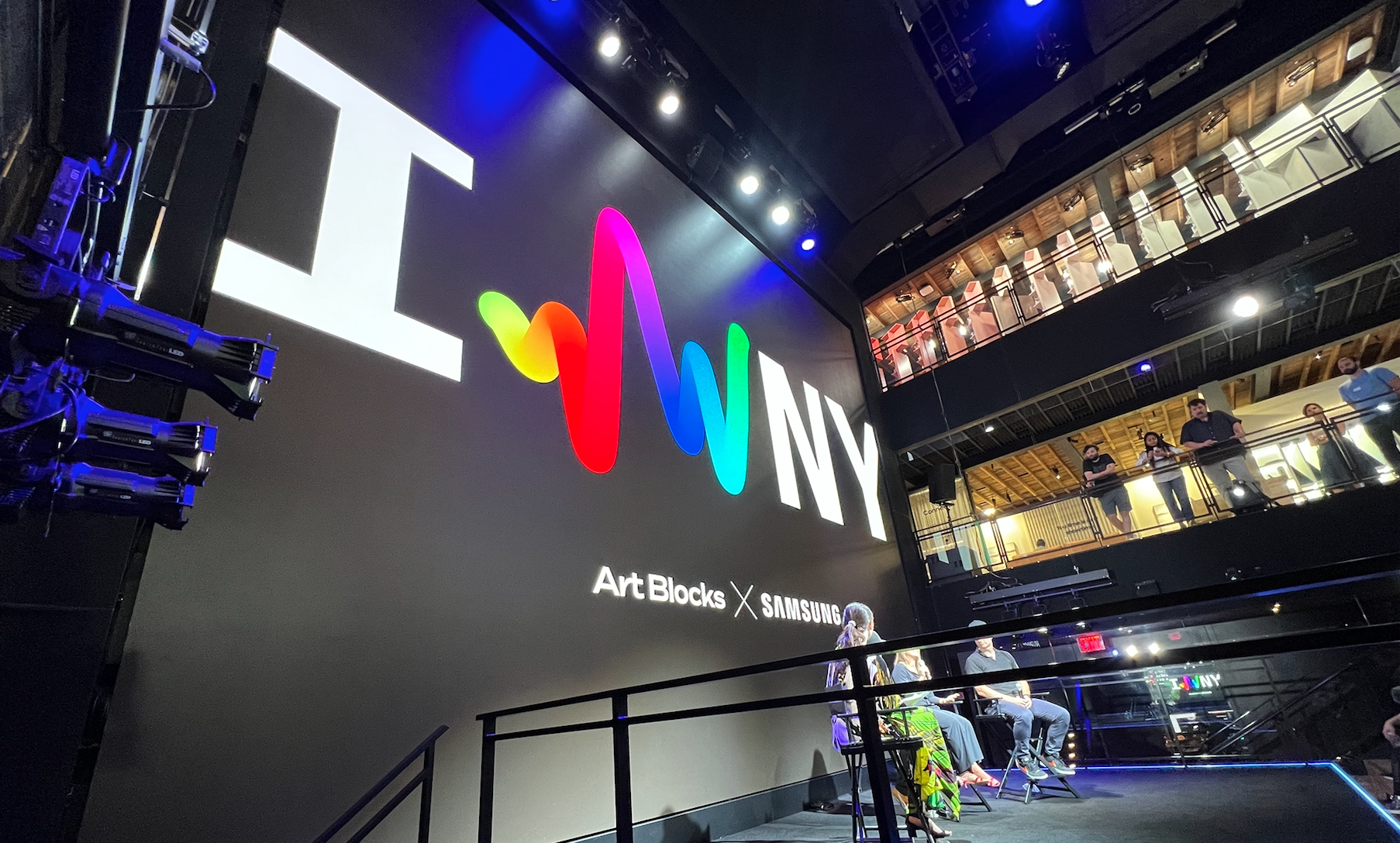 Alex Estorick: You’ve recently announced a collaboration between Art Blocks and Pace Verso. How did that come about?

‍Snowfro: I was introduced to the President and CEO of Pace, Marc Glimcher, in February or March of 2021. And something Marc demonstrated early on was a curiosity not only about NFTs but also the concept of generative minting. He was particularly interested in the idea — one that we’ve always fought for at Art Blocks — that the artist can watch the birth of a collection at the same time as the collector.

Marc introduced me and Jeff Davis (Chief Creative Officer at Art Blocks) to his wonderful team and we started having conversations about what it might look like for Pace to introduce artists to Art Blocks, and to the concept of generative, on-demand minting. Obviously, we’ve established ourselves as a great place to do this type of work — we have the technology, we have a collector base that seems to truly understand art, and we’re excited to share that group of people with the traditional art world.

AE: It’s often assumed that the people who collect crypto art and those who collect mainstream contemporary art are different people. How true is that from your experience?‍

S: I think originally they were different people. I sure as hell didn’t feel comfortable walking into an art gallery a year and a half ago. I didn’t know much about contemporary art other than the artists I’ve always followed like James Turrell, Robert Irwin, and Donald Judd (1928-1994). So we are different people. But we are also settling on a joint appreciation of something that’s pretty new and special.

Both traditional art collectors and NFT degenerates — which I consider myself — are supportive of artists, both on the primary market and through secondary market royalties. This is something extra powerful in the generative space where there are so many more mints, and where people are constantly trading one piece for another, because they like red more than yellow, etc. There’s just so much more movement and dynamism in a market like that. So Art Blocks and Pace Verso are collaborating in order to enjoy that together.

AE: Is the culture of resale royalties that has emerged in the NFT space starting to penetrate the traditional art world?

‍S: Something that is really interesting here is that the Pace roster of artists is possibly being exposed to the potential of a secondary market royalty for the first time in their careers. And that has to feel pretty special. No matter what level you are in your career, whether you’re making $50 per week or $50 per month in secondary market royalties, or you’re an established artist who has always felt the need to create new work to survive — maybe this can allow you to take a step back and enjoy your project, to immerse yourself not only in what you created, but in the community response that you’ve generated.‍

‍AE: For me, Web3 is at its best when it embraces grassroots creator communities around the world. Do you worry that engaging with the traditional art world could override those qualities that are native to the NFT space?‍

We are still so early in this space, and we have such a tiny collector base compared to the world of art in general. As a platform, Art Blocks will learn from Pace, which has 60 years of experience navigating the art world. But I also believe that Pace will learn from Art Blocks. ‍

AE: One striking quality of generative art is the surprise that each output generates. It feels like a generous art that unites artists and collectors within a mutually supportive community. You are an artist with your own practice, but you’ve also done a lot to decentralize creativity through Art Blocks. Does generative art alter the identity of the artist?‍

S: To me, it is really important that the coherence of the artist remains. Because that is how they will benefit the most from their dedication to this craft. But there are also new synergies that are emerging out of collectivity — people are curating sets of different artworks by different artists that might have a shared color theme or style. Nobody was expecting that.

With Art Blocks, there developed a trend for collecting one of every generative work within the curated collection, or one work from every series. And this concept of collectibility actually rubs the contemporary art world the wrong way, because they’re trying to avoid being swept into owning collectibles rather than artworks. But from my perspective, this concept of collectibility within our space is special, and it’s something the contemporary art world can get excited about.

‍AE: Where do you see the boundary between long-form generative art that can produce thousands of outputs and 10K PFP (profile picture) projects that rely on generative systems? Is the difference simply utility?‍

S: Generative art enables one person to impart their artistic vision to more works than they might otherwise be able to produce by hand. If artists could make 10,000 things by hand within a reasonable time frame, maybe generative approaches wouldn’t be so effective. Today, we live in a more globalized world where the number of potential collectors is significantly higher than ever before. However, many collectors cannot afford to buy art at very high prices, which dictates the future of how art is collected. It may also shape the production of art toward collectibility.

I actually think that there’s a lot of utility in what we’re doing at Art Blocks. I don’t think that Tyler Hobbs or Kjetil Golid are going to be interested in pursuing utility for their work. But as an open infrastructure ecosystem, in principle anyone could create a gating mechanism whereby collectors are only able to purchase a new work if they already own a Paper Armada (2021). Personally, I reject the term “collectible” because, as a collector, I’m driven to own one of every color set of my favorite generative art project.

Am I treating the work as a collectible even if I’m driven to participate in its artistic creation at a deep level? Why should collectibility make something any less art? There is going to be overlap between art and collectibles and it’s going to make some people uncomfortable. But people should be free to experience art in the way they want. ‍

I’m proud of my collection of CryptoPunks (2017), Autoglyphs (2019), and Meebits (2021) as well as NBA Top Shot and I don’t care if people regard them as collectibles or not. I want to put them in a gallery so that people from the traditional art world can feel the same joy as I do.‍

AE: Generative art projects like Autoglyphs (2019) sit within the lineage of early computer art as well as modernist painting. It seems to me that perhaps the greatest success of Art Blocks has been to elevate generative art to the level of importance it always deserved. How do you feel about that? ‍

S: When we’re talking about our favorite art, maybe we don’t need to use words like “painting,” “sculpture,” or even “generative art.” Maybe “art” is enough. When I think about what James Turrell is doing, it’s not generative, but it is programming light. And if I had the financial wherewithal to do it, I would want to collect Projection Pieces by Turrell in every shape. Does that make them collectibles? I don’t think so. ‍‍

‍AE: Does the NFT suit more ephemeral approaches to art?‍

S: 100%. With generative NFTs you can create an instruction set for humans to enact a performance, or for computers to create projections, or for fountains to spray water based on algorithmic instructions. And because that choreography is based on the entropy of the hash, it can be replicated identically within the NFT — to be taken home and re-experienced as a moment captured in real life. We are driven by our memories and our experiences, and I’d never want to reduce the value of art to that of a souvenir. But being able to preserve a memory is almost equivalent to buying a piece of art. ‍

‍AE: It sounds like you’re saying that NFTs provide unique experiences, regardless of whether or not they are a collectible, a work of generative art, or another kind of practice. Can you talk a bit about your own art practice? What is the future for Snowfro after the Squiggle?

‍S: I’m both incredibly excited and also terrified about creating another work because of what’s happened with Chromie Squiggles. Originally, they were a proof of concept rather than an art form, but over time they became a recognizable thing that I’m now incredibly proud of. They were meant to be sweet and simple and clean, and they made people smile. But they were also created without any pressure, and I do think that creativity becomes infinitely more difficult under pressure.

A year ago, I had never been introduced as an artist, so the pressure of what comes next is significant. And I’m sure I can surpass it because I’m terrified to disappoint. I’m driven to innovate and be impactful by making sure that everyone who knows the Chromie Squiggle has the chance to own the next project. And it feels weird to exclude anybody, but at the same time it is incredibly difficult to create a generative edition of more than 1,000 iterations. There are currently 2,500 Squiggle holders, so how do I make sure that everyone who wants to participate gets to participate in a meaningful way?

‍AE: A few years ago you were selling large editions of porcelain tiles, which are both aesthetic and functional objects. Did generative art feel like a natural next step?‍

S: Everything in my life has involved blocks, whether it’s tiles, three-dimensional sculptural blocks, or blockchain. When I started the tile business, porcelain tile wasn’t very common as it was more expensive. But it was also more technologically advanced. Yesterday it hit me that what I’m doing now — developing a technology to produce art that is durable from an authentication perspective and a timestamping perspective — is similar to what I was doing 20 years ago in the ceramic tile world. Porcelain tile is still the best solution. And in my opinion, NFTs are the best solution for documenting born digital art.

Erick Calderon, better known as Snowfro, is an entrepreneur, artist, and technology enthusiast born in Mexico City and residing in Houston, Texas. He spent the first 18 years of his career operating a boutique ceramic tile company named La Nova Tile, working with high-end architecture and interior design projects across the United States. In his early 30s, he began developing artistic projects, creating works in multiple media including video projections, computer code, 3D printing, and sculpture. In 2020, he founded Art Blocks as a platform for on-demand generative art on the Ethereum blockchain. He released his own artwork, Chromie Squiggle — an algorithmic edition of 10,000 NFTs — as the first project on the Art Blocks platform. Calderon is a tireless advocate of NFTs as a technology, and is dedicated to elevating generative art as a medium of expression within the world of contemporary art.