Art Blocks and the Data of Generative Art

Following a year in which generative art went mainstream, Kyle Waters mines the data behind the platform that launched a new movement 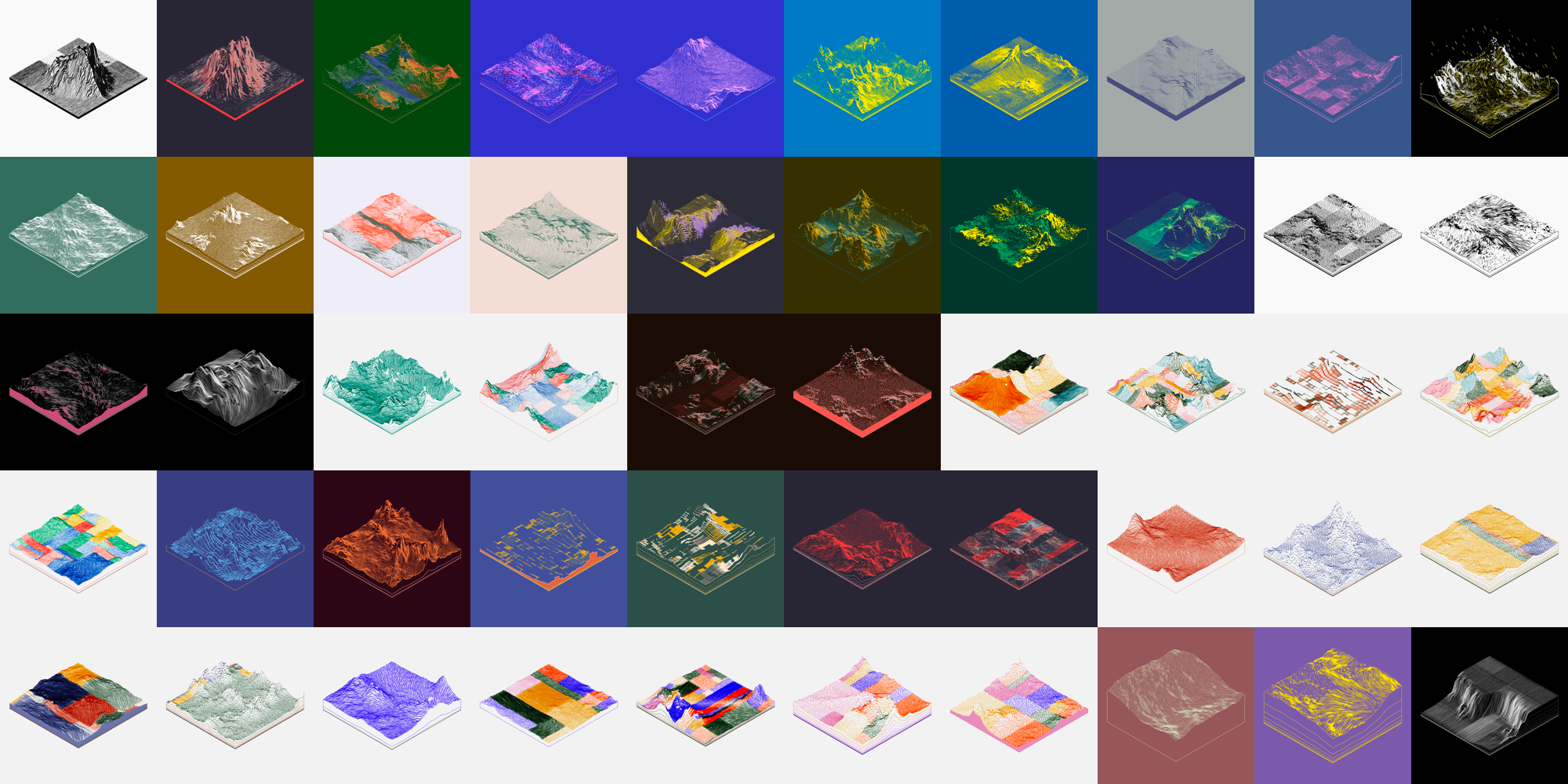 Humans have been making art with computers for over half a century. Pioneers like Georg Nees, Frieder Nake, and Michael Noll were important early innovators in generating art with computer code. Georg Nees’s 1969 thesis, Generative Computergraphik, presented sublime works created not from hand-made brush strokes but from sets of rules interpreted by a computer.

Today, generative art has arguably never been more popular and recognized by the wider public. While the recent sale of Vera Molnár’s work, 2% of disorder in co-operation #01 (2022) on the occasion of the artist’s 98th birthday reinforces the tightening thread of generative art history. A quick scan of Google Trends — a cursory yet potent gauge of general interest — shows that worldwide searches for “generative art” reached an all-time high in 2021. But what was behind this rise? Enter Art Blocks.

By now, even casual followers of the NFT ecosystem will likely be aware of Art Blocks, the Ethereum-based generative art platform. When I recently reviewed data in the year of the NFT, Art Blocks stood out among crypto art platforms, recording $1.4 billion in total sales volume. From this data, it was clear that Art Blocks deserved an analysis in its own right. Here, I explain the Art Blocks platform and examine the data behind its rise to cultural prominence.

Art Blocks emphasizes that it is “generative art on the blockchain.” Generative art describes works of art that are created entirely from computer code, and generative artists on Art Blocks write code to express their artistic vision. They program functions and scripts, taking as input some arbitrary data that then deterministically produce a visual output in the form of a GIF, static image, or interactive experience. Each NFT maps to an individual artwork produced by the given algorithm.

Notice how in the above script, the pseudo-randomness is generated from the tokenData. If the same data is passed to the program, it will create the same output in a predictable manner (technically from a hexadecimal hash string, which Art Blocks explains in more detail here).

Art Blocks on the Blockchain

Art Blocks is also “on the blockchain.” Art Blocks issues NFTs on the Ethereum blockchain, and the blockchain itself plays a key role in the artistic process. Unlike other works of crypto art which an artist will upload (i.e. “mint”) and bring to the blockchain for sale, collectors are active participants in the minting of Art Blocks NFTs. In fact, when a collector mints an Art Blocks NFT, their Ethereum wallet address is used as one of the inputs to generate the pseudo-random tokenData described above, creating an artist-collector symbiosis.

But is each image stored directly on the blockchain? As ClubNFT attests, NFT storage takes on many different forms and requires careful attention to understand the nuances. Art Blocks is an interesting case study. While each individual image or graphic itself is not stored on the Ethereum blockchain, the program code for each project is. Anyone can go and read this code from the Ethereum blockchain (as I did to uncover Snowfro’s Chromie Squiggle code) and reproduce each artwork themselves.

There’s a lot to unpack here and for those fluent in the language of Ethereum smart contracts, hash functions, and the like I recommend checking out this article from Art Blocks’ Druid for additional details.

The Growth of Art Blocks

Art Blocks projects are categorized according to three different types: Curated, playground, and factory. Curated projects are handpicked by a committee and “push the boundaries of Generative Art in their technical innovation and aesthetic beauty.” Playground projects can be thought of as spin-off projects, created by artists already included in the curated collection who would like to experiment without awaiting further approval to the curated set. Factory projects are created by artists yet to be admitted by the curators, but still meet a more relaxed set of requirements. In this section, I break down some of the key measures of Art Blocks’ growth.

Across these 300 projects, a total of 177,000 artworks have been created. A project typically permits 1,000 mints, though the inaugural project, Chromie Squiggle, has the most tokens for a single project with 9,305.

The owner base of Art Blocks works has grown substantially since its launch. Across all three platforms, there are now approximately 34,000 unique Ethereum addresses that own at least one Art Blocks work. Growth accelerated over the “JPEG summer” of 2021 when interest in Art Blocks surged.

While the summer surely brought many new serious collectors to Art Blocks, there are also signs of particularly high churn amongst owners. In August 2021 alone over 70,000 tokens were transferred between Ethereum addresses, excluding mint events. The frequency has since come down, with the number of transfers per month averaging around 10,000 between January and March of this year.

One of the best overviews of generative art, Jason Bailey’s “Why Love Generative Art” observed that the power of computing offers new tools to artists to reach a new range of originality.

Generative art takes full advantage of everything that computing has to offer, producing elegant and compelling artworks that extend the same principles and goals artists have pursued from the inception of modern art.

There are an almost infinite number of ways to wrap a string around a set of pegs. On the surface it may seem like a simple concept but prepare to be surprised and delighted at the variety of combinations the algorithm can produce. Each output from ‘Ringers’ is derived from a unique transaction hash and generated in Javascript in the browser. Feature variations include peg count, sizing, layout, wrap orientation, and a few colorful flourishes for good measure.

Condensing all 300 descriptions into the word cloud below, we see that uniqueness, as explored in the Ringers description above, is an important theme across all projects.

Other themes relating to geometry are frequently included, such as: “complex,” “elements,” “geometric,” “physical,” and “shapes.” The proceeds from many Art Blocks sales have been donated as well, as reflected by the frequency of the word “donated” in the descriptions.

As mentioned earlier, the scripts (or code) that generate the art on Art Blocks are readily available to analyze from the Ethereum blockchain.

Some artworks are generated from long scripts with myriad functions and lines of code. But other scripts are more succinct, achieving their output with less code. How much do these scripts vary in their complexity and length? Is there a wide range or are most projects generated from scripts of similar length? The chart below plots the distribution of all Art Blocks project scripts, measured by number of characters. Most projects have under 20,000 characters, with a median of about 10,400.

The project with the shortest script is Alexander Reben’s SpiroFlakes (2021), which is a succinct 1,244 characters.

Reben is aware of his project’s compact scale, viewing it as “Complexity arising from the simplicity of sine and cosine.”

At the other end, Leo Villareal’s Cosmic Reef (2022) is the longest, composed of 121,138 characters. Unsurprisingly, the project’s description warns that “Cosmic Reef is graphics intensive & requires a WebGL2-enabled browser.” Cosmic Reef’s dynamism reflects its code’s complexity:

But it is important to note that the complexity of any given script is constrained by the limits of data storage on the blockchain. Storing large quantities of data on Ethereum is very expensive because each node in the network has to maintain a record of the blockchain. For example, uploading the 121,000 characters of the script above cost approximately $32,000 in total gas fees (at today’s ETH price) split across 13 different transactions (see for example). But this is proof that Art Blocks is committed to providing an immutable record of every generative script.

Like much of the NFT space, Art Blocks might seem intimidating to the uninitiated and less tech savvy. For Jason Bailey:

Your appreciation of this genre will only improve if you explore the algorithms and programming behind the work.

The fact that one can literally generate new versions of an artwork by inputting new randomness reinforces the vital importance of coded language to the visual outputs of generative art. Indeed, it’s easy to get a feel for the generative process simply playing around with the code, as I’ve done here below. Anyone interested can follow these steps to retrieve the code for their favorite Art Blocks projects. First, simply navigate to “Read Contract” on the Art Blocks smart contract on Etherscan. Next, enter the Art Blocks project ID in the 'projectScriptByIndex' function (number 22). This will return the code as below:

Armed with the code, one can go to a p5 JavaScript editor like https://editor.p5js.org/ and play around with it. Below, I’ve pulled the code for Art Blocks project #284, Robert Hodgin’s Ancient Courses of Fictional Rivers (2022). Change the input “tokenData” and see how the butterfly effect of small changes can impact the final output of the generative code. Full disclosure, I am the proud owner of Hodgin’s work, shown here. As a long-time fan of the SimCity computer games I particularly love its cartographic aesthetic and simulated environment.

With a confluence of world-class generative artists and novel artistic experiences enabled by the blockchain, it’s easy to understand Art Blocks’ rise in popularity. The marketplace has quickly become one of the most respected and popular venues for collecting and appreciating generative art. But it is not the only NFT platform for generative art. The recent launch of Tezos-based fxhash is a reminder of the art form’s ongoing renaissance and increasingly collaborative community.

More than anything, it’s clear that the world has started to take notice of generative art and the fundamentally new artist-collector experience Art Blocks is facilitating. Still in only its second year, the platform’s meteoric rise is helping to drive generative art’s mainstream moment.

Kyle Waters is a Research Analyst at Coin Metrics, a firm specializing in blockchain analytics and intelligence. He co-authors the Coin Metrics weekly newsletter “State of the Network,” alongside other long-form research content spanning the cryptosphere. He is a Data Science Contributor to ClubNFT and has been contributing to the art and technology blog Artnome since 2018.