Brendan Dawes and the Art of Lost Time 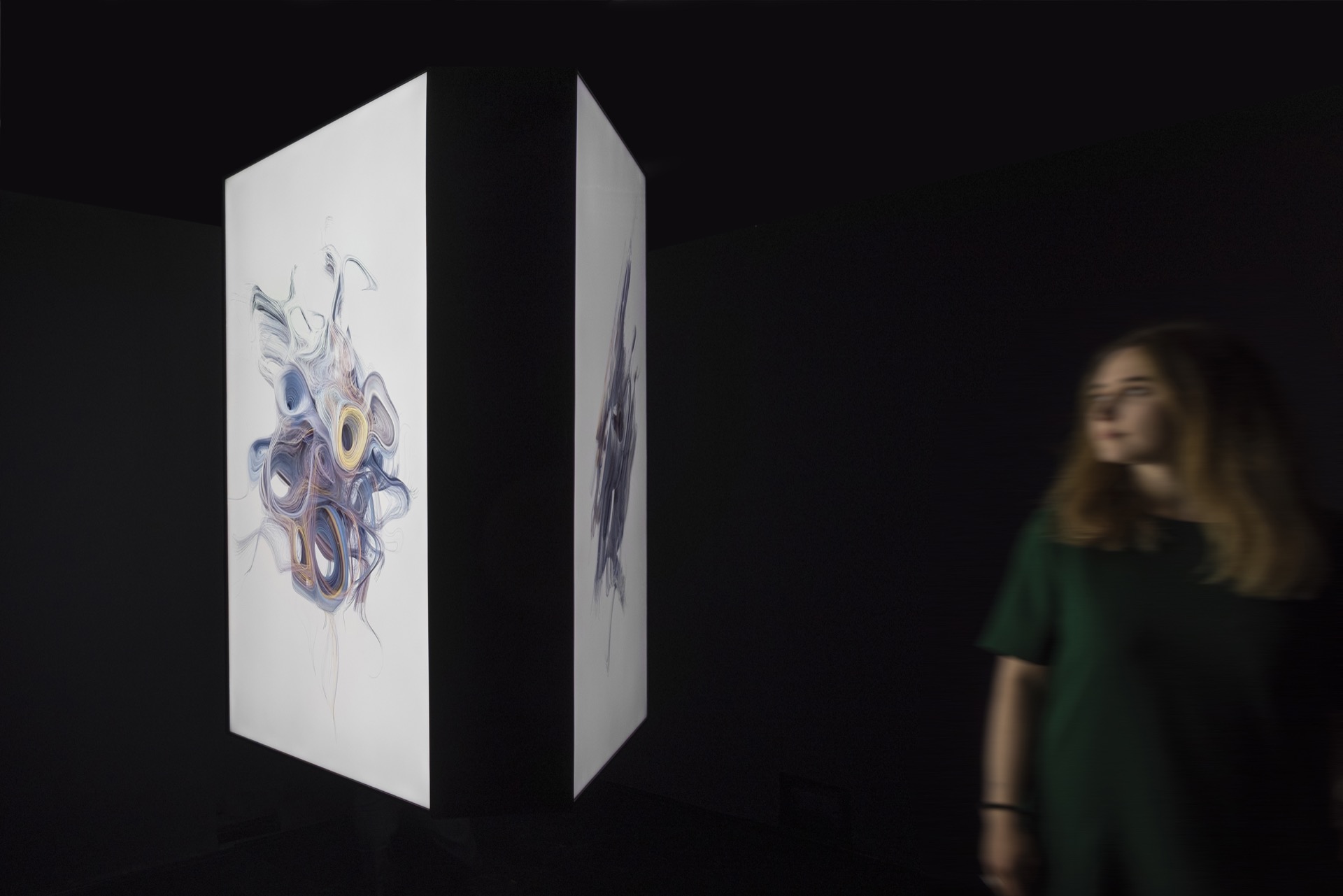 Credit: Brendan Dawes, Moments Spent with Others, 2022. Courtesy of the artist
Now Reading:
Brendan Dawes and the Art of Lost Time

Brendan Dawes may have left school at 16, read what he wanted, and made art as he saw fit, but with NFTs he has engaged a new community of collectors. His work spans issues from surveillance capitalism to Twitter dependency to user design, yet it also holds a gentleness and optimism that distinguishes the artist from many of his Web3 peers. With his three-part work, Moments Spent with Others (2022), currently on display at GAZELL.iO, he presents data-driven abstractions that capture digital flows of talk and touch with an intimate sensibility. It also reframes the NFT as a means of interaction rather than a tool for transaction.

‍Charlotte Kent: Brendan, you are known for your long-standing work with data. When did that become a part of your practice?

‍Brendan Dawes: I wouldn’t actually say I am interested in data, or at least not in the way people think about it when they hear the word. I’m interested in beauty, life, society, and all that pop culture entails. All of that to me is data. The word data just conjures up an image of soulless spreadsheets. I’m interested in moments that punctuate the fabric of our every day — the micro-interactions of body language, behavior, language, and action is an unending stream of observable moments that fascinates me.

‍CK: We all know that websites and tech corporations capture our personal data, but we don’t typically think of moments in our lives as data points. For your NFT triptych, Moments Spent with Others, how did you identify data points for each work?

‍BD: The idea for the shape of these three memories: I’ll Take a Slice; Everything is Perfect; and Two Person Cinema, came from an article which said that in the course of a day we have approximately 6,000 thoughts. The work’s data points are a combination of time and imagery. For the time component, I created an algorithm to allow me to enter a date in order to influence the make-up of the visible pattern. The older the memory, the less complexity — things coalesce because memories of events further back in time are fuzzy. Everything is Perfect, the most recent memory, is much more complex and detailed than the others.

‍CK: The three parts of Moments Spent with Others are being sold as a single NFT. What prompted that decision?

‍BD: A memory can be viewed from different perspectives, with different people remembering the same things in completely different ways. That’s why I wanted to show the same memory from three different perspectives at the same time. It also made it more physical within the space, prompting the audience to walk around it, to feel its physicality — departing from what we expect a digital screen to communicate. I’m always intrigued by which angle is people’s favorite.

CK: What have you most enjoyed about working with NFTs, given your long history with digital art?

‍BD: I have a relationship with the collectors of my work that I just didn’t have before.

In the past, when I sold something through a gallery, I never knew who the collector was unless they personally reached out to me. Now that’s all changed because I have a direct relationship with my collectors through a momentary transaction embedded in the blockchain.

It’s one of the reasons I created The Collectors (2021) as physical totems of my collectors’ first transactions. Now I enjoy having video calls with many of them, hearing stories of how and why they collect art. Of course, community is central to the NFT space. But I remember when I had my Satellites (2021) drop on Nifty Gateway. That was some of my favorite work, yet it wasn’t well received at the time by the NG community. I got pretty down about it, especially after receiving some nasty comments. Then XCOPY messaged me for the first time to tell me not to feel disparaged by the comments. He didn’t have to take the time to do that but it meant a lot that he did.

CK: Beyond immediate collectors or fans, were there artists or scholars whose ideas made you look deeper into this space?

‍BD: I left school at sixteen with sod all qualifications. All I know is when something resonates with me; when it leaves me altered, that’s what matters. That could come from an interaction at the local bread shop as much as some peer-reviewed scholarly article. Surely it’s more healthy to look outside one’s own field (not that my field is data anyway) and instead take in all that the world has to offer. I’d much rather go deep into the work of film-maker Lynne Ramsey, for example, than any kind of data.

Virginia’s Woolf’s The Waves (1931) is my favorite book of all time. It’s a stream of consciousness, without any discernible narrative — beginning, middle or end — written in such a beautiful, poetic way, amplifying what are often mundane moments and acknowledging their beauty and importance. The other book that achieves this for me is Nicholson Baker’s The Mezzanine (1988). The whole book is his own thoughts as he travels on an escalator up to a mezzanine. I love that granular level of inquiry.

‍CK: How granular is your act of collecting data? Do you have rules for it?

‍BD: Sometimes it’s from public data sets and sometimes it’s from bespoke tools that I’ve created myself. I did a project back in 2018, called Amongst The Leaves (2018), using environmental data collected by David Hunter, Senior Lecturer in Graphic Design at London’s Ravensbourne University. Over the course of a year, he collected data around the campus and then asked me and other artists to create something with it. My response was to create code which turned those data sets into 3D printed forms inspired by the shape of a horse-chestnut conker. These were then put back into the environment from which the data was originally collected. I wanted people to find them and think: “Hang on, there’s something weird here.”

Further back, in 2013, I created an iPhone app called Kennedy, which allowed people to mark moments holistically by inputting their surrounding context — weather, time of day, location, and even the news. I got the idea after 9/11, wondering what was happening on QVC as the Twin Towers collapsed? Was it still selling things? Kennedy was named after people’s indelible memories of where they were when Kennedy was assassinated, but I also use it to collect data about myself, which I use to create things when I want to. I’ve now collected almost ten years worth of moments which are enveloped by what was happening in the world at that time.

‍CK: Works like The Art of Cybersecurity (2019) push against the overarching dangers of surveillance capitalism. How did you develop your own perspective on the issue?

‍BD: The first thing many people think of with cybersecurity is hoodie-wearing hackers, techno music, and machismo. I went completely the other way, inspired by composers like Philip Glass and Michael Nyman to imagine the work as a complete filmic event.

I asked myself: “Why do we protect our computer systems?” It’s so that we can do the things we love to do.

CK: How do you balance caution in your creative practice with the reinforcement of data as a pervasive quantification of our lives?

‍BD: All the data I’ve ever used has been anonymous and without personal data tied to it, or at least none that is not already in the public domain.

‍CK: Doris Le Bot (2015) harnessed people’s Twitter feeds to produce digital creatures whose different features were based on their followings and frequency of use. What did you learn from investigating that data set?

‍BD: That work will always be very special to me. The original Twitter-born creatures were more like tiny machines, but the project felt cold, without the level of empathy appropriate to a Twitter handle which is tied to a human being. Just prior to installation, I completely changed the project to ensure it resonated in a human way. If you want to make something more human just add eyes!

‍CK: In the last year, your work has been shown online and in galleries all over the world. How do audiences respond differently to it?

‍BD: When I talk about my work, there’s often a consensus among the audience that one particular piece stands out. But one person will always come up to me and reference a completely different work that meant something personal to them. One audience member recently approached me to say that Frequencies (2021), my collaboration with Sion Trefor, made her teary eyed. But when I first shared that work in my Twitter feed, no one commented on it because the first few seconds are a black screen meaning that people simply scrolled past it. That told me a lot about the importance of time and place to the experience of my work.

CK: Time is limited, and gamified, in Web3. Does that constrict opportunities for artists to achieve success?

‍BD: We’re surrounded these days by “life hacks” — to execute tasks more quickly in order to complete even more tasks. This logic seeks to make people more machine-like. But we aren’t efficient. We are beautifully illogical and don’t make sense. Art doesn’t make sense either, but it’s life-affirming for it.

Of course, the endless stream of hype affects me. I always think I should be doing more and then I get into a downward spiral of believing everything I’ve ever done is bad. But I’ve come to see it as an inevitable part of the process, and a motivation to stay patient and not worry about what others are doing. The architect Frank Gehry advises that we “become experts in ourselves.” I’ve taken that on board. And I take all the time I need to achieve it.

‍Charlotte Kent is an arts writer and assistant professor of visual culture at Montclair State University. With a background in philosophy and literature, as well as in ophthalmic publishing, she brings an interdisciplinary approach to visual art and digital culture with a current research focus on the absurd. She is an Editor-at-Large for The Brooklyn Rail, and contributes to peer review journals and international magazines.