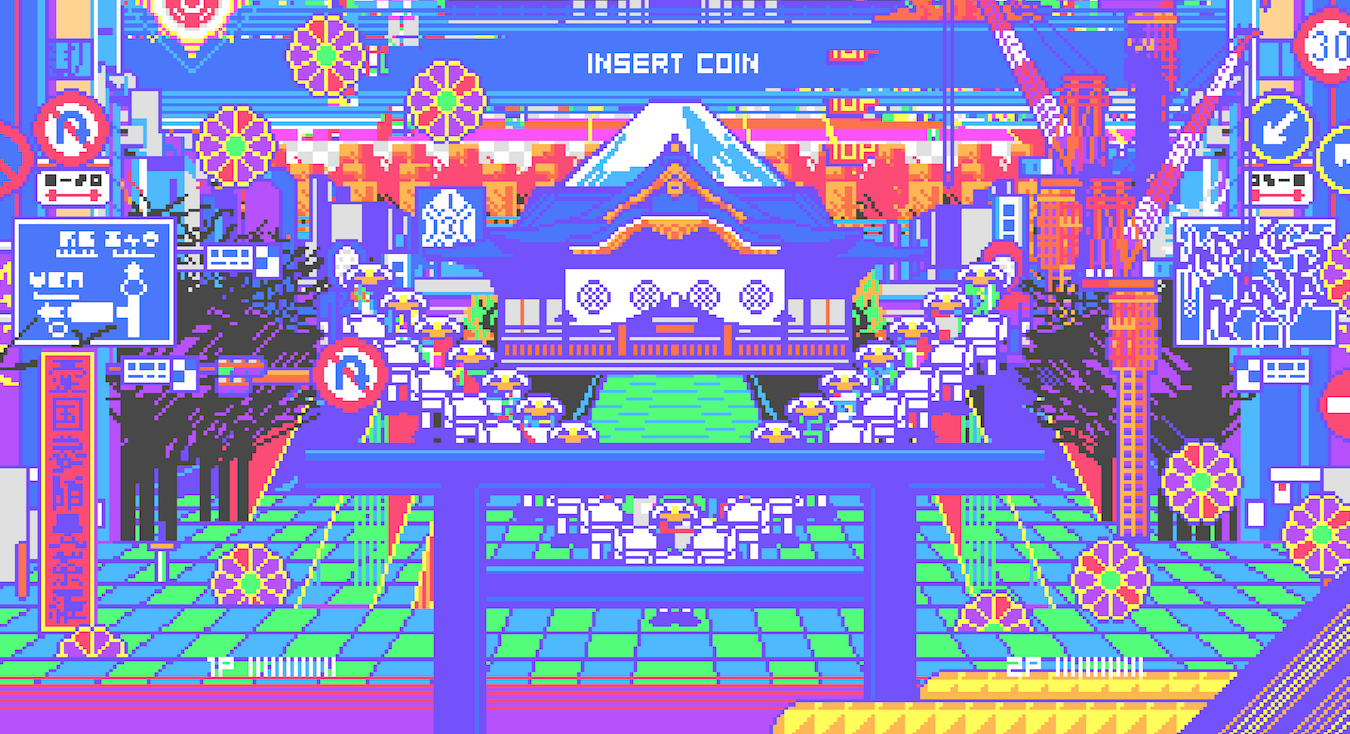 For those who might have missed it, Right Click Live was an event held in Tokyo on December 11, 2022. A collaboration between Right Click Save and KUMALEON, coverage of the day’s proceedings is still available online in Japanese and English translations. This was the first international NFT art event in Japan, comprising artist introductions and panel discussions that provoked free dialog between all participants. As an art writer myself, it was exactly what I had been looking for — a first opportunity to reflect on the current state of the NFT scene in Japan as well as the ongoing challenges facing the technology.

‍What made the event special and surprising, however, was how it brought together speakers from many newly emerging fields with a number of NFT artists who had previously operated only in secret.

While few admit it publicly, NFTs have not done well thus far in Japan. As in other parts of the world, mainstream conversation about NFTs is still preoccupied with sale prices over and above the artistic potential of the technology. Goh Uozumi, an artist who has been minting NFTs since 2019, wrote on his blog that “[t]he lack of criticality in the early days of [the] NFT […] was one of the factors that set the course for the subsequent dominance of hype.” While it is undoubtedly necessary for Japan to explore new economic opportunities, the greed fostered by the 2021 bubble has so far dissuaded many Japanese art professionals from engaging with NFTs.

Generative artist Alexis André, who has lived and worked in Japan for many years, opened his panel by asking passionately: “why aren’t [more] Japanese artists participating on Art Blocks?” While Shunsuke Takawo, who himself advocates daily coding, also laments the lack of awareness of generative art in Japan. His work, Generativemasks (2021), is one of the most successful NFT projects by a Japanese artist so far, but there has been little debate about it in the domestic art world.

‍While Japan is renowned for its openness to new technologies, clearly the art world still has reservations.

Despite Japan’s historical embrace of video games, and its channeling of sci-fi culture through manga and anime, it tends to regard new trends with suspicion. In recent years, many of the micro-communities that have emerged have promptly disappeared, indicative of our collective tendency to scrap and rebuild. Every generation is consequently locked into its own memory. On the other hand, there are always individuals eager to explore new territory in the field of technology.

‍Startbahn, led by one of the speakers at Right Click Live, Taihei Shii, has been engaged with blockchain technology since 2015 in order to “assure the reliability, authenticity, and traceability of artworks.” The emergence of NFTs also prompted Rhizomatiks — one of the first Japanese groups straddling art and technology — to launch NFT Experiment as a means of selling their own digital outputs. Even teamLab, a group of engineers known for its large-scale installations, recently released its own NFT project, Matter is Void (2022), in concert with Pace Verso.

Yet the majority of digital creators have been biding their time. While long-standing crypto artists like Mera Takeru do exist, as well as pixel artists Hermippe, mae, Kazuki Takakura, and the collective Excalibur, all of whom have engaged with NFTs, many others are still watching and waiting. Arguably, it is those from the Japanese media art community who have made the biggest contribution to the NFT debate so far. A case in point is Metaverse Petshop (2022), a recent installation by pioneering Web1 artists exonemo (Kensuke Sembo and Yae Akaiwa).

The work challenges the ethics of Web3’s ownership economy by forcing the owner of a virtual pet to skin their animal in order to convert it into an NFT.

Another pioneer of media art in Japan, Masaki Fujihata, has developd an NFT project, Brave New Commons (2021), that undermines the NFT as a speculative vehicle. By dividing the price of a range of digital artworks according to the number of buyers, the more people who buy, the lower the price. That the digital works in question constitute early images made using MacPaint ties Fujihata to the wider technostalgia of Web3. By contrast, Web2 is often associated with the algorithmic organization of social relations. In response, the research group ALTERNATIVE MACHINE has sought to challenge the use of Artificial Life (ALife) technologies to optimize society. Their NFT project, The Chord (2021-22), is a work of minimal sound art in which a chord composed of five notes slowly decays over 60 seconds, with its surrounding environment reframed as a delayed data storage device.

Another hallmark of Web2 is its accelerated distribution of images, which has fostered cultural equivalence between many different art forms. Thanks to social media, works of lofty creativity are now assimilated within a mass meme economy. But in Web3, NFT technology has turned this emerging horizontality into a new creator economy. It was on Hic et Nunc that I first encountered the grassroots culture that has come to characterize crypto art, underpinned by a climate of mutual support that recalls the independent music scene of yesteryear. To outsiders, it can be hard to decipher the cultural value that flows among such enthusiastic micro-communities, and, needless to say, it helps to be close to the source of cultural creation.

But for legacy media so accustomed to consuming culture, the NFT’s location within a vibrant creator economy remains an ongoing challenge.

While I have felt the frustration of not being able to communicate NFT trends myself, I also see the seeds of a new movement currently sprouting. The recognition of Japanese artist, qubibi, by the Tezos art scene reflects this. His presence in Japan is unique, as he has already been presenting interactive art online for some time. All of his works have a strong sense of color, though his artistic process remains shrouded in mystery. Another creator known for his highly personal approach is Renki Yamasaki, who releases looped videos on a daily basis as if he were keeping a diary. His works, which are full of small surprises, get closer to natural phenomena every day.

What has changed recently is that Japanese artists who have managed to establish a foothold in the NFT space are finally starting to notice each other. These include Kazuhiro Tanimoto — one of the few Japanese artists to have exhibited on Art Blocks; generative artist, Gin, who participated in the recent Tribute to Herbert W. Franke; ykxotkx, who creates pictorial worlds of exceptional depth with code; A-Mashiro, who conjures abstract worlds of great beauty; and Saeko Ehara, an artist and VJ who creates video works of sparkling euphoria.

Each of these artists has a unique style, but what they all have in common is that they have used English from the beginning to disseminate information about their work to collectors beyond Japanese shores.

With a new generative and digital art scene quietly emerging, experimental works that use blockchain as a medium are also coming to the fore. TART, which supported the smart contract portion of Generativemasks, has since launched an ambitious project to merge generative art with collectible characters called KUMALEON. Meanwhile, Kyoto-based artist, BOUZE, who also works with smart contracts, has developed a project called HODL (2022) that grows according to the time it is owned. 0xhaiku is another emerging talent to have released experimental on-chain works. These include marquee shelter (2022), which uses deprecated HTML tags, and Receipt (2022), which evolves depending on the amount of money spent on it.

Many such artists have only emerged in the aftermath of the NFT and might therefore be described as natively crypto. Their works are not principally intended for the existing art world, but rather for the artists and collectors who inhabit the NFT space. As a result, many in Japan remain unaware of their existence. However, their labors are finally starting to gain recognition. While the market has suffered over the past year, much has also been done to stabilize crypto art on firmer foundations. Of course, few other areas of culture have seen such dramatic successes and failures than crypto. Where will it end? Nobody knows. What we do know is that events like Right Click Live signal the beginning of a trend. And once that movement has begun, nothing can hold it back.

Yusuke Shono is publisher of Massage Magazine, a media outlet that disseminates information about online culture. He is involved in book and exhibition planning, shedding light on culture yet to be discovered. He is the lead editor of The New Creator Economy (2022), a comprehensive collection of articles and artwork on the subject of NFTs, published by BNN.

‍This article was translated from the original Japanese version, published by Massage Magazine. Right Click Live in Tokyo was co-hosted by Right Click Save and KUMALEON at Digital Garage, Shibuya on December 11, 2022.