An Interview with Monica Rizzoli

To celebrate the launch of NFT ART CDMX, the artist introduces her new project to Malte Rauch of Bright Moments 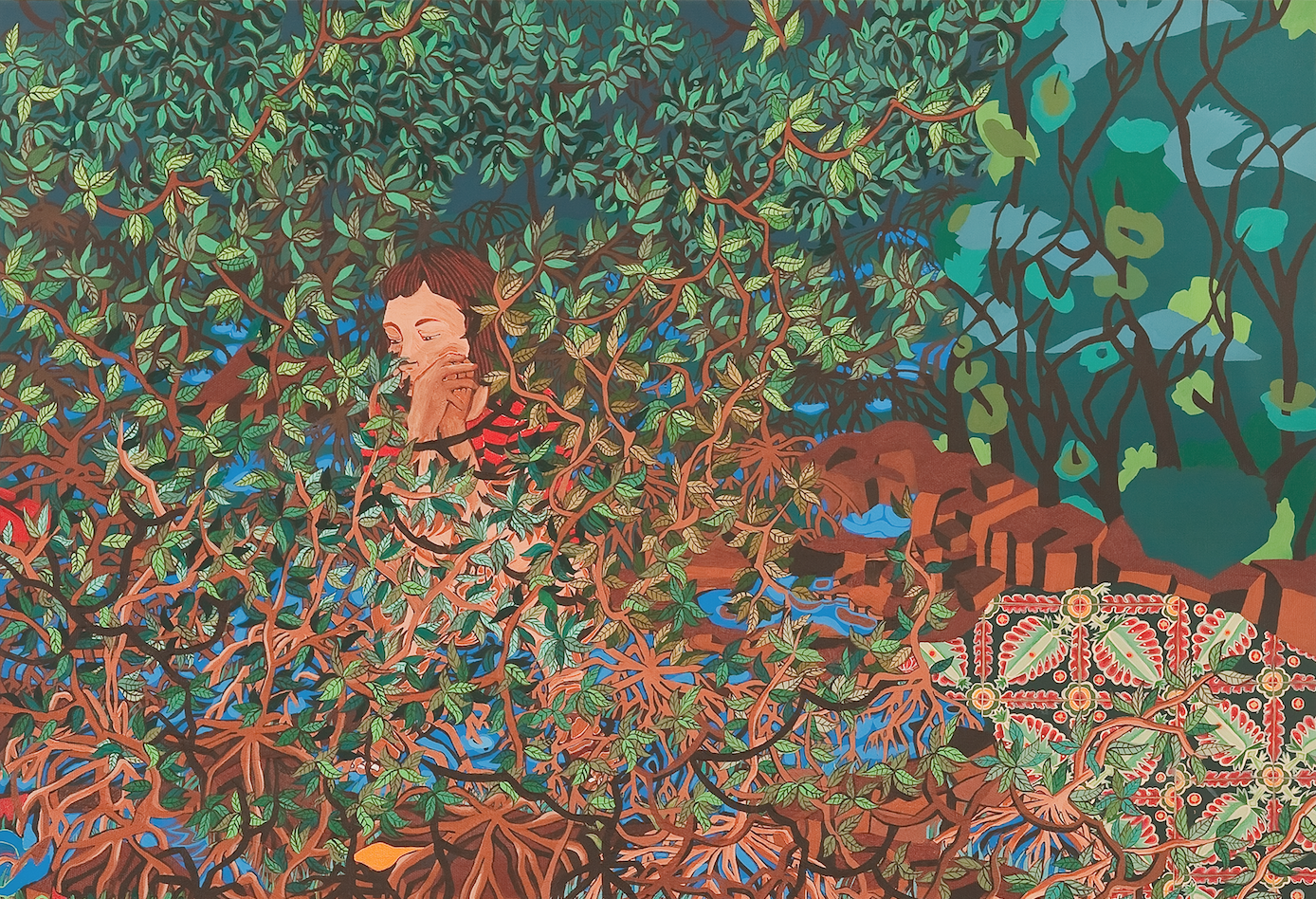 Malte Rauch: Thanks for agreeing to do this interview, Monica. How did you get started in generative art?

‍Monica Rizzoli: I went to Kassel for my studies in 2012. Back then, I was under the impression that my life in Germany would be quite similar to my life in Brazil, but it was radically different. When you arrive in a new place, your perception of the environment changes, prompting a heightened sense of awareness. Everything stands out — the landscape, the architecture, and the texture of all things. That led me to study my surroundings closely, making drawings and sketches.

I then became interested in images that changed over time. There is a movie by Alain Resnais, Smoking/No Smoking (1993), that has bifurcating storylines that map out different possible scenarios. I wanted to do something similar for the patterns and structures that I observed in my new environment, which led me to Processing. My early work with it was received quite well. In 2014 I made a project for MAK Vienna and I won the Schindler Scholarship. In 2015, I exhibited my first generative art work at the MAK Center, Los Angeles.

‍MR: All aspects of the environment — landscape, floral forms, seasons, and colors — play an important role in your artistic practice. Could you elaborate on this influence and share your thoughts about the relation between natural and digital ecosystems?

‍MoR: My father was a pilot, so traveling has always been hugely important in my life. And if you travel a lot, there is always a need to adjust to new environments. But many things also stay the same.

No matter where you are, you always eat, sleep, and interact with people. But how you do these things depends on the environment itself. This sparked my interest in the interconnectedness of all things.

Like anything about which one is passionate, there is also something you cannot explain. This is how I feel about my interest in the environment — I am drawn to it as a theme without fully understanding why.

‍MR: What are the main artistic inspirations for your practice aside from this strong interest in natural forms

‍MoR: I draw inspiration from many sources. One of my earliest inspirations was the tradition of scientific illustration, carried out by travelers like Alexander von Humboldt. I also love all kinds of ornaments. My grandfather had a print shop, which influenced my association of art with craft: patterns, tiles, and vernacular arts. Repetition and structured patterns fascinate me. As far as artists are concerned, Henri Rousseau and Sol LeWitt have both inspired me — a strange couple, I know! The language-based and performative work of Yoko Ono has also been quite important for me.

‍MR: What drew you to NFTs in the first place?

‍MoR: When I returned to Brazil after my studies in Kassel, I had a hard time convincing the art world that code-based art has its place in contemporary art. The idea was met with immense resistance. So, for many years, I was working mostly as an educator. I taught Processing and creative coding classes without finding recognition for my own code-based art.

When NFTs emerged, I saw an opportunity to exhibit work that had no place in the traditional market. Early on, it was obvious to me that this would open up a new audience.

‍MR: As someone who recognized the potential of NFTs early on, what fascinates you about generative art and specifically the introduction of long-form, on-chain generative art?

‍MoR: My first NFTs were MP4s and GIFs. It was great to find a new audience for my work, but the format did not satisfy me. So I studied Solidity and tried to do some smart contract coding on my own. It was around that time that I first heard about Art Blocks. Once I had understood what they were doing, I knew that this was a game changer. Now, I could sell the actual piece of code on chain, rather than an extracted file, which was incredibly exciting. The emergence of Art Blocks felt like something I had been waiting for my entire life.

From a conceptual point of view, Sol LeWitt has continued to play an important role in my long-form generative art works, especially his idea that constraints yield outputs that one could never have expected. Art Blocks provided the technical infrastructure to explore this thought on a completely new level.

‍MR: What does your creative process look like? Do you start with code or in a different medium?

‍MoR: Creative work can be very absorbing, so I try to set limits for myself. I always keep a journal with me in order to make sketches of my surroundings, which sometimes inspires my code-based work. Often, however, I am inspired by completely unexpected sources. For instance, after recently moving to Portugal, I bought a specific camera in order to photograph animals at night. During coding, I realized that I subconsciously began to recreate the colors and shapes of my nocturnal photography.

In my process as a creative coder, I am very interested in the subtle variations of the output space. Often, I let the algorithm run and make tweaks to adjust that output space. But my code-based work always exists alongside my other work in different media. In my studio, I also paint, photograph, collect, and categorize things that I find in nature, exploring the same forms and themes through different media.

Morphology and morphogenesis are at the center of my creative process. It is all about the study of simple forms that lead to more expressive forms.

‍MR: Your generative artworks have been exhibited before, but “NFT ART CDMX” will be your first live-minting event. Does this influence your coding practice?

‍MoR: The opportunity to mint these works IRL is exciting and opens up many possibilities for the work. In particular, I love the physicality that the exhibition gives to the NFTs. This possibility to curate an experience that will become a significant memory fascinates me. For me, Bright Moments is essentially about this experience, whose memory stays with you after the NFT has been minted. It also shapes the way I think about the work, since it makes me question how I can create a work that lends itself to be experienced in this way.

‍MR: From our previous conversations, I gather that water will play a crucial role in your installation. Could you describe the project?

‍MoR: The idea to use water came to me when we had our first conversations about “NFT ART CDMX”. I recalled reading a book that narrated how Mexico City was built on water; that it essentially emerged from islands. And I found the idea of exploring these deep waters — this hidden foundation — intriguing. What I find particularly fascinating about water is the way it both isolates and connects things. I’ve wanted to use the movement of water in my work: both surface movement and the flow of things in the water.

What experience am I trying to create for the audience? Corporeal contact has the highest significance for me. So the reveal will require collectors to put their hands in the water to reveal the work. Nature and humanity are the same for me. This is why there is no contradiction between us and water. We do not create things that are not there, we simply combine things. For me, creation is always a question of combination and rearrangement.

‍MR: That sounds like a truly memorable minting experience. Taking a step back, where do you see the generative art space headed?

‍MoR: I believe that the paradigms are shifting right now.

Looking back, this epoch will be remembered as a period of radical change in which new technologies disrupted the traditional art market. After this upheaval, “we” will be accepted as the new normal.

With NFTs, the difference between the original and the copy disappears. The idea of ownership remains, but not the idea of the original artwork. Moreover, with the multiplication of the image, the value of artworks will increase, which is radically different to earlier regimes of image production. Now, the value of an image increases because the image has a higher likelihood to live on. The erasure of the distinction between an original and a copy will change everything. Our perception of aesthetics, value, and the function of art will change drastically. Creativity is not limited to humans.

Monica Rizzoli is a Brazilian-born artist based in Portugal. In 2021, she released two NFT projects: “Tropical Garden” and the generative work, Fragments of an Infinite Field, on Art Blocks. She is also a surface designer at Contrast Studio and a type designer at Just in Type foundry. She has designed typefaces such as Tomorrow, available on Google Fonts, and organizes projects such as Noite de Processing and Processing Community Day Brasil. Born in São Carlos, Rizzolli attended the IA-UNESP in São Paulo, Brazil and the Kunsthochschule Kassel, Germany. She has exhibited globally and is a recipient of the MAK Schindler Scholarship and the Sweet Home residency by Hablar En Arte, Madrid.

‍Bright Moments is proud to present “NFT ART CDMX”: a four-day celebration of generative art in the heart of Mexico City. It runs from 16 to 19 November at General Prim 32.