Are NFTs a Real Solution for Museums? 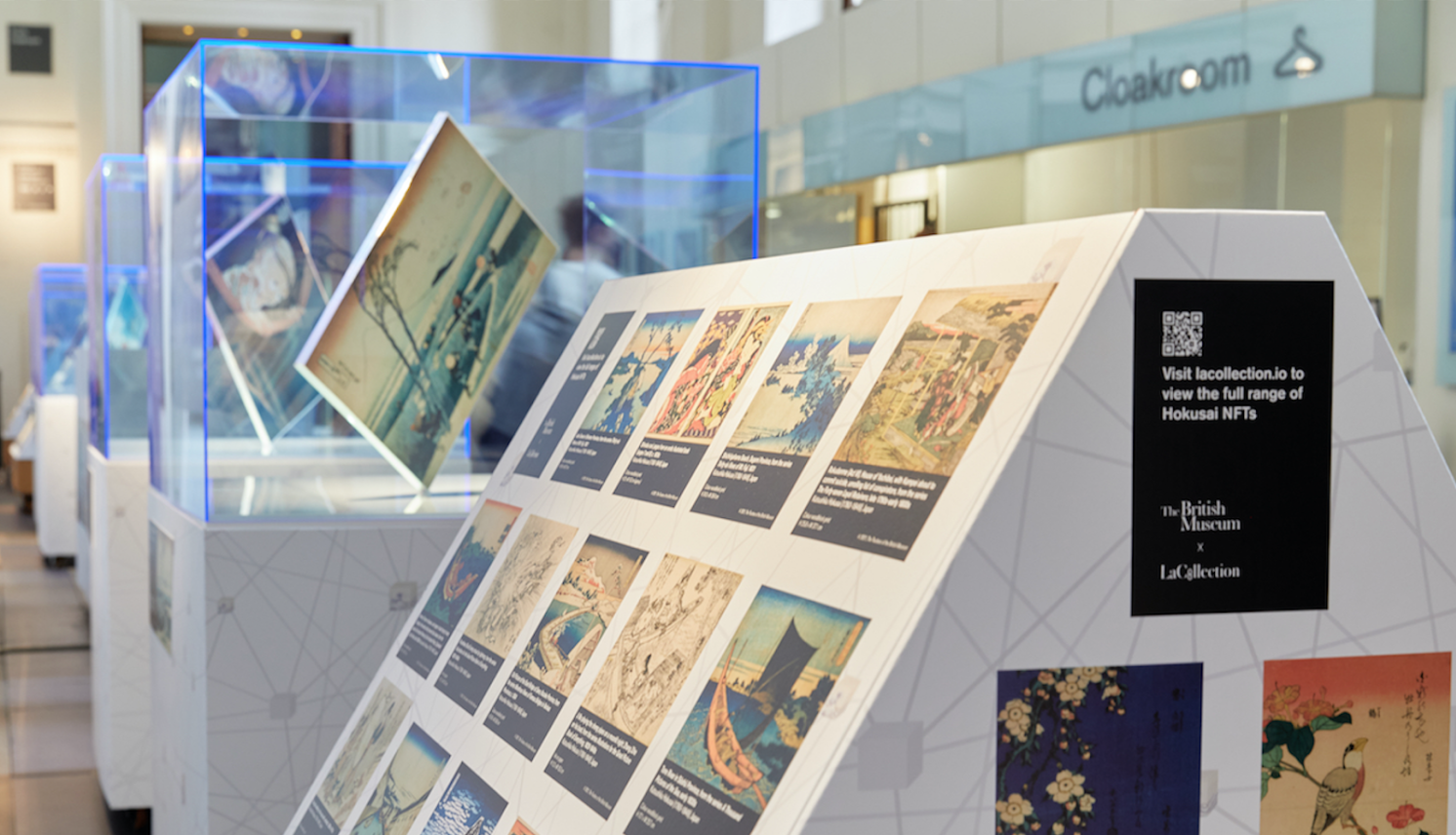 Credit: NFT Shop at The British Museum, 2022. Courtesy of LaCollection
Now Reading:
Are NFTs a Real Solution for Museums?

Since NFTs went mainstream in early 2021, they have been the subject of much heated discussion in museum circles. The year prior, 2020, was one of the toughest years for cultural heritage in recent memory, with extended lockdowns producing a 77% drop in visitor figures for art museums globally. This forced institutions large and small to fight for their financial survival with redundancies and even deaccessions, including the sale of museum artifacts on financial, rather than curatorial, grounds. It may seem surprising that two world-leading institutions like Tate and the Victoria and Albert Museum were forced to make hundreds of employees redundant. But such is the operational reality of many large-scale museums today.

On the question of deaccessioning, some institutions sold pieces central to their collections to raise new funds. The Everson Museum auctioned Jackson Pollock’s Red Composition (1946) for $12 million, while London’s Royal Opera House sold off David Hockney’s 1971 portrait of its own Chief Executive David Webster, for £12.8 million ($16.6 million) in order “to raise vital funds.” (It has since been loaned back by its new owner, David Ross, who chairs the trustees of both the Royal Opera House and National Portrait Gallery.)

Given the emergence of NFTs in such a turbulent context, some museums are understandably eager to explore their potential. Indeed, an Op-Ed on artnet the day before Beeple’s Everydays sold for $69 million was titled: “The Surging Demand for Digital Collectibles Could Offer a Lifeline for Cash-Strapped Museums — Here’s How.” But behind closed doors, major museums had already started exploring this exotic, new medium.

Only a couple of months later, the Italian newspaper Corriere della Sera reported that a collector from Rome had purchased a 1/1 NFT by Florence’s Uffizi Gallery featuring a digital surrogate of Michelangelo’s Doni Tondo (1505-6) for €140,000 ($168,000) as a birthday present for her husband. ClubNFT’s Jason Bailey has since described the sale of NFTs featuring museum images as “digital deaccessions,” urging institutions to avoid the technology before fully understanding what they are giving up.

However, given the museum sector’s dire finances, necessity is driving experimentation. Last summer, the State Hermitage Museum collaborated with Binance to auction five different 1/2 NFTs — retaining one edition for the museum — for a total of 440,000 BUSD (Binance USD). This included Leonardo’s Madonna Litta (mid-1490s). Last Fall, The British Museum also started selling large editions of NFT “postcards” comprising 200 Hokusai woodblock prints. As part of their ongoing partnership with LaCollection, they have since dropped NFTs for twenty further paintings by JMW Turner in the museum’s collection.

Beyond these early adopters, criticism of NFTs from the broader cultural sector has been fierce. At the heart of it is Ethereum’s carbon footprint. “It is no secret: NFTs are helping to destroy our planet” was the opening sentence of an Art Newspaper article last March, while a congressional memorandum this January outlined how “The energy required to validate just one Ethereum transaction could power a U.S. home for more than a week.”

Beyond the environmental question, the case of the Global Art Museum (GAM) last March provoked even more criticism from museum circles. Presenting itself as an organization that “transforms historic art into blockchain-secured NFTs,” GAM offered NFT masterpieces by Vermeer and Seurat for sale on OpenSea, claiming it would share 10% of all profits with the works’ host museums. GAM was free to use these images because their respective institutions had made them available through the Open Galleries Libraries Archives and Museums (OpenGLAM) initiative, with a CC0 license that allows unrestricted reuse in any jurisdiction around the world.

While from a strictly legal standpoint GAM did not infringe copyright, it did imply endorsement by claiming revenue sharing and also by naming NFT collections after their respective institutions. Museum professionals were quick to call out GAM, and after the Rijksmuseum — which pioneered OpenGLAM and was one of the museums whose works GAM had tokenized — confirmed that it had no partnership in place, GAM removed all the works and designated the project an “NFT social experiment.” The Rijksmuseum’s tweeted response to the case of GAM was that their collection is “open to everyone” and that the goal of their open data policy is to “to connect [their] collection to as many and diverse people as possible.” Nevertheless, museum professionals consider GAM to be “a wakeup call” for the cultural heritage sector, claiming that “NFTs could be harmful if we do not acknowledge them.”

There have also been numerous instances of copyrighted museum images being tokenized as NFTs, with institutions dependent on the takedown policies of the relevant marketplace. However, in one case, NFTs were instead deployed to build a case for an artifact’s repatriation from a museum collection. Since 2017, the Cercle d’Art des Travailleurs de Plantation Congolaise (Congolese Plantation Workers Art League, or CATPC) with help from Dutch artist Renzo Martens, have been seeking a loan of the statue of Maximilien Balot from the Virginia Museum of Fine Arts (VMFA). Balot was a Belgian officer beheaded during an uprising in Congo in 1931, with the sculpture later created “to contain and control” the officer’s spirit. Starchitect Rem Koolhaas’s firm, OMA, has already designed the White Cube gallery in Lusagna, Democratic Republic of Congo, to host the sculpture once the VMFA agree to approve the loan, which is still to happen.

After years of effort by the CATPC, including via a series of short films titled Plantations and Museums (2021), its community has been left with “the strong impression” that the Virginia Museum of Fine Arts is “not ready” to lend them the statue. As a response, they have since taken the artifact’s image from the VMFA’s website and, under the fair use doctrine, used it as the basis for a series of NFTs. For Cedart Tamasala, one of CATPC’s artists, by minting Balot’s NFTs “we have reappropriated otherwise what belongs to us intellectually, artistically, morally.” Yet, the museum has since said it no longer intends to loan the artwork, that “the NFT has broken all trust between VMFA and the exhibition organizers.” Artnet’s Kate Brown has since queried whether the VMFA was ever really planning to loan the work in the first place.

Beyond the contest over images, NFTs also pose further problems for museums — especially national museums — that intend to leverage the technology to raise revenue. As has been argued elsewhere, NFTs can be considered the digital equivalent of limited editions, representing a form of ownership over an artifact’s digital surrogate. But are there any circumstances in which museums are justified in selling limited editions of works in their collections?

France prohibits financially-motivated deaccessions, while in the UK, public collections are often regarded as being held in trust for the public, with any financially-motivated disposals subject to close scrutiny. Even in the US, where museums are rarely publicly owned, the scope for financially motivated deaccessions remains limited. One might therefore query whether museums have the right even to tokenize their archival master files — the best digital copies of their works — or indeed any other forms of “digital twin.” One possible alternative is for institutions to use NFTs to offer new forms of digital content to supplement their collections, indeed to better educate their publics, rather than ceding any kind of ownership in their digitized collections.

Of course, one significant, but rarely discussed, challenge of blockchain technology is cybersecurity. In Web3, “Undo” and “Reset your password” are no longer options, which renders human users ever vulnerable to online exploitation. As a paper from 2016 revealed: “50% of the worst breaches in the last year were caused by inadvertent human error, rising from 31% the previous year.” Given the blockchain’s technical rigidity, which makes it difficult if not impossible to reverse actions already registered, this brave new world is plagued by risks.

A case where “Undo” would have come in handy is that of ZMK, the Centre for Art and Media in Karlsruhe, Germany, which has accidentally lost access to two CryptoPunks, each valued at 60 ETH ($187,000). The museum’s software engineer and crypto expert-in-residence, Daniel Heiss, had in fact purchased four CryptoPunks for $100 each back in 2017. But last April, Heiss, who is a Web3 native himself, accidentally transferred them to an inaccessible wallet:

“The transfer of the punks was a stupid copy/paste failure” he explained to The Art Newspaper. On the other hand, “The museum’s purpose was never to sell the works anyway” so now “the two punks are ours forever.”

While, last August the prominent NFT journalist Farokh tweeted a lost wallet containing over 250 ETH worth of NFTs, including a rare Bored Ape. Using custodial wallets, as on Binance, is one approach to address such issues. However, custodial wallets are not really a solution, as they go against the truly decentralized nature of the blockchain. And while research exists that proposes solutions for wallet retrieval in a decentralized manner, we are yet to see any such solutions deployed in practice. Issues of metadata permanence and the fact that very little data is actually stored “on-chain” remain core problems. Though Cardano offers native support for NFTs, while ClubNFT offers its own tool to protect off-chain assets.

According to Gartner Research, which visualizes the “Hype Cycle of Emerging Technologies,” NFTs are currently at the very “Peak of Inflated Expectations” with the “Trough of Disillusionment” yet to come. Following this trajectory, the technology is estimated to reach a “Plateau of Productivity” in two to five years’ time. So while risks remain, as well as unknown unknowns, NFTs nonetheless represent a powerful emergent medium that offer a wealth of opportunities yet to be explored.

Watching major museums stress-testing new technologies, while beset by criticism from all sides, only serves to highlight the reactionary nature of legacy culture. Institutions like The British Museum and Florence’s Uffizi Gallery that are currently experimenting with NFTs may be toying with digital deaccession, but they are also innovating ways for the wider cultural sector to survive.

Foteini Valeonti is the Lead Author of “Crypto Collectibles, Museum Funding and OpenGLAM: Challenges, Opportunities and the Potential of Non-Fungible Tokens (NFTs),” one of the first in-depth studies of the NFT as it relates to the cultural heritage sector. Dr Valeonti is a Research Fellow at UCL and the Founder of USEUM Collectibles, a UCL spin-out company that provides research-driven consulting to cultural institutions regarding NFTs and Web3. She holds a BSc in Computer Science and a PhD in Digital Humanities. She is currently advising policymakers while helping major museums, companies, and smaller heritage institutions to leverage NFTs for public benefit.

LaCollection’s mission is to connect audiences with the world’s leading cultural institutions, artists, and collections through new technology. The platform aims to inspire the next generation of art collectors and enthusiasts by offering NFT artworks for purchase in conjunction with leading cultural institutions. Each NFT is authenticated, approved by the relevant museum or gallery, and secured on the blockchain.

LaCollection has just announced an exclusive NFT collection and group exhibition in collaboration with contemporary new media art gallery ANNKA KULTYS GALLERY. “Web 3.0 Aesthetics: In the Future Post-Hype of the NFTs (a Trilogy Curated by Annka Kultys),” is a collection and exhibition staged in three parts over the course of 2022. The first part of the trilogy will be a group exhibition from 7 to 16 May, 2022.