A Brief History of Rare Pepe 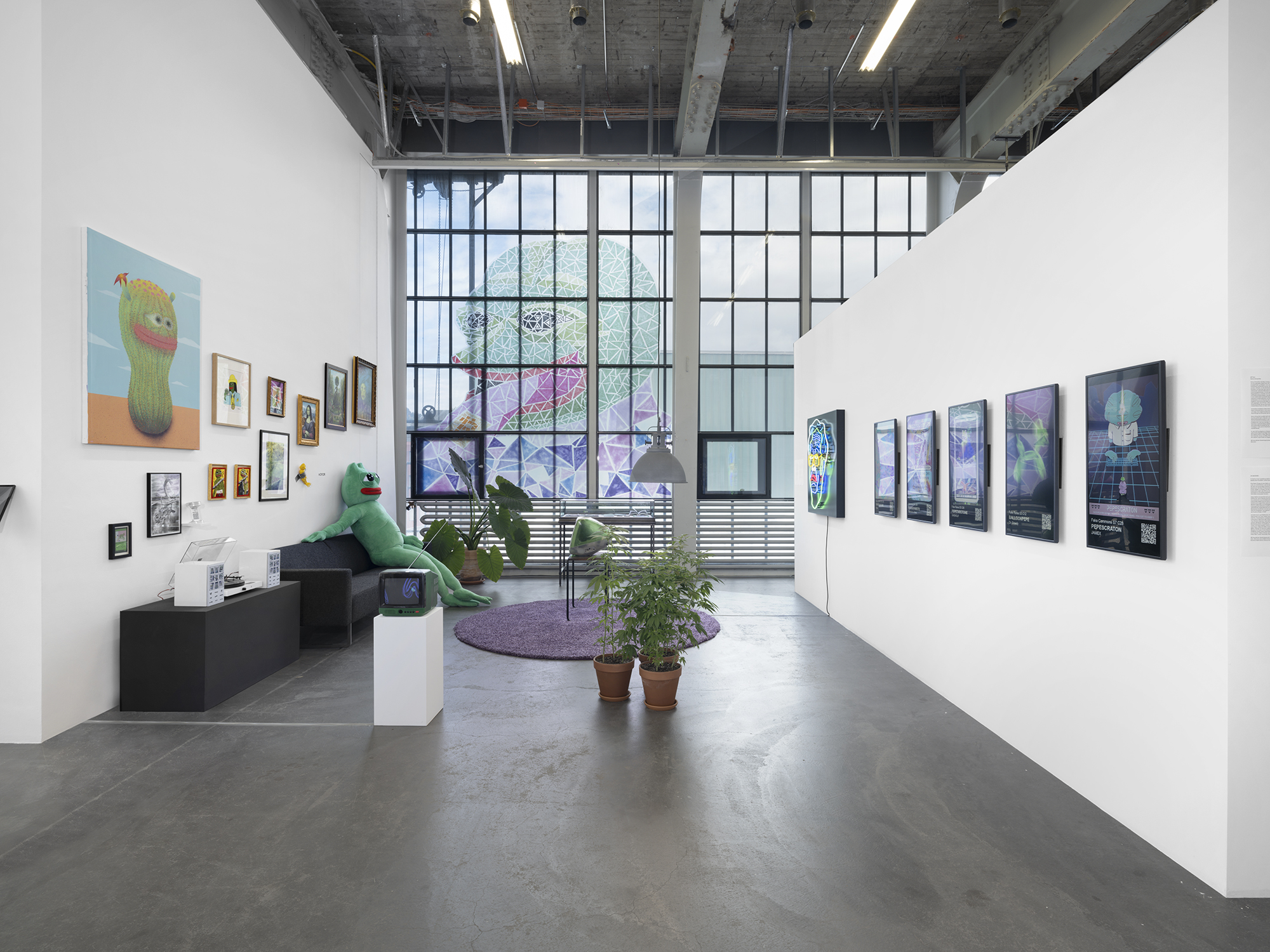 Since the exhibition “DYOR” opened in October 2022, visitors to Kunsthalle Zürich have encountered the surprising figure of Pepe the cartoon Frog surrounded by historic works of crypto art. Curated by Nina Roehrs, “DYOR” (Do Your Own Research) emphasizes the role played by Rare Pepe, a bitcoin-based project centered on the popular meme, in the development of crypto art in general. The exhibition incorporates a prominent living room-style Pepe space, sub-curated by Fabian Wyss, that traces a history of the distinctive, endlessly redrawn frog on its way to becoming the millennial Mickey Mouse.

Rare Pepes are collectible digital trading cards that explore the life of the irresistibly memetic Pepe, created by Matt Furie back in 2005 for his self-made zine Playtime. The project ultimately evolved into a handmade comic book, Boy’s Club, with Pepe one of four postcollegiate slacker roommates, described by Furie as “little critters who represent my early-20s lifestyle.”

Furie scanned the comics, which then went viral among bodybuilder and anime communities when he posted them on his Myspace account. Following Pepe’s meteoric rise to becoming the Internet’s unofficial mascot, the Rare Pepe project hit a peak in 2014 when celebrities such as Katy Perry and Nicki Minaj posted viral frog memes on their social media channels.

Around that time, message board users started introducing the concept of rarity, adding watermarks to their memes, while christening them “Rare Pepes”. Users began creating collections of Pepe memes, exchanging them like trading cards, with the number of different variants promptly exceeding one thousand. Within months, such collections began surfacing across online marketplaces, from eBay to Craigslist. One prominent auction in April 2015 was removed by eBay with a highest bid of $99,166. Then, in September 2016, an anonymous user called “Mike” created three Pepe trading cards, backing them on the Counterparty protocol — an application layer of the Bitcoin blockchain. The user tokenized the trading cards as Counterparty assets in indistinguishable editions.

While these are often identified as some of the earliest NFTs from a conceptual standpoint, their fungibility renders them by definition, not.

Mike’s project was highly influential in the development of the crypto art movement, with Rare Pepe emerging as an inclusive community-driven project when Joe Looney adapted his own Counterparty marketplace to create Rare Pepe Wallet (RPW). This subsequently became the essential space to collect, display, and trade Rare Pepe cards. Until then, only a few technologists and even fewer blockchain gaming companies had explored the idea of tokenized assets.

With RPW, anyone who made a modicum of effort without contravening the platform’s NSFW (“Not Safe for Work”) policy could submit designs for Rare Pepe cards. By removing all the technical entry barriers to creating crypto art, RPW managed to onboard hundreds of users and first-time collectors. Thanks to its decentralized ideals, the platform ultimately generated hundreds of trading cards, which in turn evolved the meme’s iconography as well as new blockchain histories and personalities.

Given RPW’s position as the prototypical NFT marketplace, it came as no surprise when a Rare Pepe card, Homer Pepe (2018), sold for the highest price at Rare Art Fest in New York in January 2018 — a milestone auction of early crypto art projects. Conceived by an anonymous artist, ICQ, the work sold for a then record-breaking sum of 350,000 PepeCash, the equivalent of $39,200 at the time. The auction quickly made news headlines around the world, putting the concept of tokenizing artworks and creating NFTs on the map.

Unfortunately, despite the tremendous impact of Rare Pepes on the crypto scene, the appropriation of the frog meme by far-right groups outside the RPW community led to its being undermined as a symbol of inclusive culture. Rather, the proliferation of Pepe-style images across the message boards of 4chan, 8chan, and Reddit brought about a so-called “greenwashing” period, during which Rare Pepes were written out of crypto art history. While Pepe’s viral appeal had been central to the success of Boy’s Club as an underground zine, it also left the meme vulnerable to co-option by online communities, which often sought to outdo each other by iterating Pepe into increasingly cynical and offensive forms. When Donald Trump announced his candidacy for president in 2015, such memes were weaponized in the service of a white supremacist agenda.

In September 2016, Hilary Clinton’s own presidential campaign posted an explainer on its website that sought to tie Pepe once and for all to the American Alt-Right (Alternative Right)

That cartoon frog is more sinister than you might realize.

‍Shortly after, the Anti-Defamation League (ADL) included Pepe as part of its hate symbol database even whilst it acknowledged that, in most instances, Pepe was not being used to foment hate. In a bid to reclaim his original comic book character, the meme’s original creator Matt Furie began a #SavePepe campaign, insisting that Pepe had never been intended as a symbol of hate but one of love.

Frustrated by the seemingly unstoppable trajectory of Pepe memes, Furie even tried to kill off Pepe via a comic-strip funeral in 2017. But when Pepe’s misappropriation continued, its creator began enforcing his creative rights against far-right commercial projects with the help of pro-bono lawyers. Among the 100 far-right entities against whom he successfully enforced his rights was a racist children’s book by a Texan assistant principal and posters by the far-right radio host and conspiracy theorist Alex Jones.

As it happened, quite independently of the firestorm in the US, the Rare Pepe movement inspired two spin-off projects in Asia — MemoryChain and Oasis Mining — that would ultimately bring about Pepe’s redemption.

When, in 2019, the Hong Kong government proposed a controversial extradition bill that would allow voices of political dissent to be extradited to Mainland China, pro-democracy protestors invoked Pepe as a symbol of hopeful resistance.

Incorporating the meme into banners, T-shirts, toys, and graffiti, the global visibility of the demonstrations, which led to the government’s withdrawal of the bill in October of that year, helped to rehabilitate Pepe internationally.

In 2020, an independent film directed by Arthur Jones, Feels Good Man, premiered at the Sundance Film Festival. Starring Matt Furie himself, the film summarized Pepe’s turbulent history, further recuperating the meme from a symbol of hate to an image of hope. One consequence was that first-wave crypto artists who had previously advocated for the importance of Rare Pepes to crypto art history finally started gathering support.

In a symbolic development, the Homer Pepe (2016) that had been so central to launching crypto art in the global consciousness then changed hands for a record-breaking $320,000. Thanks to its new collector, TokenAngels, Rare Pepes were included as part of Sotheby’s NFT auction, “Natively Digital 1.2,” in October 2021. His single-issuance Rare Pepe card, PEPENOPOULOS (2016), closed as the highest lot for $3.65 million. It marked the decisive end of the greenwashing period.

Since the NFT explosion of 2021, a number of the earliest Rare Pepe cards have since traded for upwards of $600,000. But given the ongoing interest of artists in creating their own Pepe memes, a community led by Rare Pepe card creator Scrilla started a new project called Fake Rares. The original creator of Rare Pepe Wallet Joe Looney has since pitched in, creating a corresponding Fake Rare Wallet.

With the growth of a Directory of both real and “Fake Rare” Pepes, the community is now organizing gallery events, including so far in Miami, New York, and Basel. Similar Directory projects such as Fake Commons and Dank Rares have subsequently emerged. To this day, the lively Rare Pepe community continues to explore Pepe’s memetic power, challenging the separation of art from the politics and play of everyday life.

Martin Lukas Ostachowski explores clouds as a subject and as a medium in order to establish connections with the elusive defining structures of the blockchain. After discovering NFTs and their transformative potential for society, he shifted his previously physical art practice toward new media. In 2018, Ostachowski began experimenting with crypto art and NFTs, co-authoring a position paper on crypto art in 2019. Since 2020 he has been documenting a comprehensive historical overview of blockchain-related art and milestones, gaining the nickname of crypto art historian. ‍